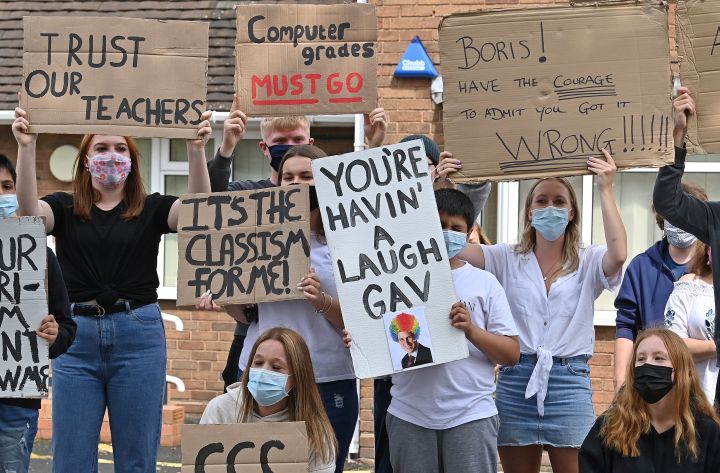 COPY
Students hold signs as they take part in a protest march from Codsall Community High School to the office of Gavin Williamson, Britain's current education secretary, to demonstrate against the downgrading of university entrance exam results. Paul Ellis/AFP via Getty Images
COVID-19

Students hold signs as they take part in a protest march from Codsall Community High School to the office of Gavin Williamson, Britain's current education secretary, to demonstrate against the downgrading of university entrance exam results. Paul Ellis/AFP via Getty Images
Listen Now

The pandemic meant students were not able to physically sit for entrance exams this spring, so teachers instead estimated grades based on a combination of work students had done earlier in the year and results of practice exams.

Those grades were then checked by exam boards who also took into consideration factors like a school’s past performance and used an algorithm to determine a student’s grades.

But the results of those assessments caused widespread protests across the country: 280,000 grades were downgraded from what teachers predicted students would earn. That’s meant high-achieving students at low-achieving schools saw a drop in their grades — in some cases from an A to a C.

The government had defended the system, but on Tuesday said it will now revert back to teacher-assessed grading only. Still, the damage may already be done.

The following is a conversation from the global edition of the Marketplace Morning Report with the BBC’s Victoria Craig and Lindsey Macmillan, a professor of economics specializing in education at the University College London.

Lindsay Macmillan: Universities make offers to students conditional on their teacher-predicted grades. Universities often offer more places than they can actually take since not all students actually end up getting those grades that the teachers predict. We have a cohort of students this year, then, who have significantly higher grades than has been seen in the past. So we’re in a position now where universities are legally required to provide a place to the students if they achieve the offer that they’ve been made. So, there are likely to be significantly more students at university this year compared to previous years.

Victoria Craig: That’s caused a lot of fury now over the handling of this year’s grading. Usually, there’s a cap on the number of students a university can admit. Now that’s been removed after all of the controversy this week. Does that mean students who want to go to their top university will now be able to?

Macmillan: What we’re going to end up seeing is that students are far more likely to get into their first choice, of course, because their grades are higher, and they’re more likely to achieve the offer that they were made from their first-choice university. This will have different implications across the university system. For higher-cost universities, they’re going to see a surge in the number of students that they have to admit. Remembering that we’re in the middle of a pandemic here, and social distancing remains so important, we may see some students being asked to defer their places until next year. The issue comes that when universities recruit students next year, a number of the spaces will already have been taken. And then this becomes an issue because next year’s cohort, who have already missed a significant period of school due to school closures, are then going to be competing having taken exams, likely with less and bloated grades, for fewer places come next year.

Craig: This all impacts university finance, in the end. More students attending university equals more money for universities. But do these schools have enough resources to accommodate that rise in student numbers? As you said, with social distancing measures in place, will there be enough space for students to learn? Will there be enough housing for them to stay in?

Macmillan: This is a kind of great unknown at the moment. It depends really on how the trajectory of the pandemic continues. A lot of universities at the moment are going online or doing some kind of mixed provision in the first term. They will still need to have students. I think the other point to make is that there’ll be inequalities across the university sector here. So, while the high-cost universities may experience this kind of surge in students that we’ve discussed, you’re going to get the lower-cost universities that may be missing out on some of the students who got their first offer, who might have, in a normal year, gone to them as their backup option. So, they may see a decline in student numbers.

Craig: Will these higher admission numbers, then, for domestic students be able to cover the loss that these universities have seen from a drop in foreign students who would be paying higher fees, but obviously now are not traveling because of the coronavirus pandemic?

Craig: All of this means that there will be more students graduating from university over the next three or four years than there otherwise would have been. So when we look at sort of the economic impact of all of this, what does that mean for the U.K. economy down the line? Especially in a time, because of the coronavirus pandemic, when we’re seeing really drastic changes in the way the labor market works? Will there be enough jobs for these university-educated students once they find themselves in the labor force?

Macmillan: I think the important point is that, at this moment in time with the labor market as weak as it is, it’s a really good thing that more students are going to university since there is very little outside option at the moment. And we know that the long-run scarring impacts of early spells out of work in a bad labor market can last a significant amount of time, especially for people from deprived backgrounds. In the longer term, that really is based on how the economy recovers over the coming years. If this is going to be a deep recession, but potentially a short one, then by the time these students have come out of university, we could be well on the road to recovery and this could be an excellent buffer against an otherwise very difficult period of time for a lot of these students.