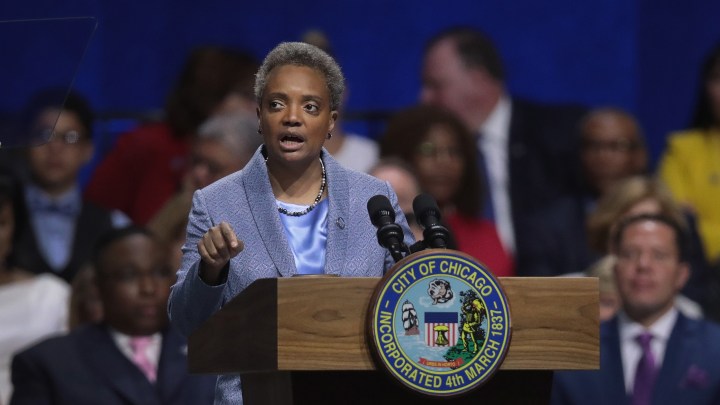 Chicago Mayor Lori Lightfoot has vowed to end poverty in her major city. Not quell, not curb, but end poverty. The initiative’s launch occurred in February, right before COVID-19 took hold in the U.S.

Lightfoot, a Democrat who’s been mayor of Chicago since late 2019, spoke with “Marketplace Morning Report” host David Brancaccio. The following is an edited transcript of their conversation.

David Brancaccio: A pandemic, a social justice movement that includes protests — has all of this put your plan to end poverty within a generation on on hold?

Lori Lightfoot: No, I think if anything, it’s brought sharper focus and a greater sense of urgency.

Brancaccio: I mean, it didn’t take protests that followed the police killing of George Floyd to get you focused on economic inequality there.

Lightfoot: No, this is something that we’ve been working on and thinking about, for me, for a number of years. I know that inequality, and particularly around wealth, is the driver of many of the challenges that we’re facing in the city, not the least of which is gun violence. The absence of, which is how we think of poverty, really has a number of cascading problems that flow from that. At the end of February, we launched our first ever poverty summit, and outlined steps to end poverty in a generation.

But the COVID crisis, I think, has really brought those measures into stark relief. When we think about the disproportionate impact that COVID-19 has had on Black and brown communities, stemming a lot from the unequal access to health care, we know that we need to accelerate the things that we had planned step by step, and really build them up much more expeditiously. What I’ve said to my team is, I don’t want to put temporary scaffolding around the problem. I want to build a foundation on which we can then really move toward solving these long-term, intergenerational problems.

Brancaccio: And it’s lots of things your team is thinking about. I mean, just one of them is a very practical thing: the cost, often the high cost, of just connecting your address to gas, water and power.

Lightfoot: Yes, we really started looking at this from the very beginning of my administration, and looking at the way in which the city has balanced its budget, historically, on the backs of those least able to handle it. We started a process last year, and we continue it, to really unwind our addiction to fines and fees. We are seeing people literally driven into bankruptcy, losing their cars […] their driving privileges, carrying around a mountain of debt, because they owe the city. We saw, prior to the start of my administration, people really, literally being disconnected from water services. I regard water as a basic human right. So we stopped that even before I officially took office. And we started a process now to bring people back into connection and give them the opportunity, after a year of making payments, to get rid of any preexisting debt.

Brancaccio: But on the fines and fees and the licenses, I mean, the city of Chicago helped itself with the money you get from those. The idea is to rethink that?

Lightfoot: We have to rethink it and here’s why. Yes, the city has historically relied heavily, but we also have literally debt going back to the 1990s that we’re absolutely never going to be able to collect. But the larger problem is, when you put people in a position where they’re literally driven into bankruptcy, where they can’t get access to basic city services, you’re taking those people out of the economy. We need people contributing. We need people to feel like they’ve got a stake in their future here in Chicago, and not that the city is basically putting up a stop sign and saying, “We don’t want you, you don’t belong here, unless you pay up.”

Brancaccio: You’ve got the minimum wage set to go up to $15 an hour next year. That’s some years earlier than your state. You’re thinking about training for people who have gotten out of prison, and you mentioned health — huge health disparities, if you compare different neighborhoods in your city.

Lightfoot: They’re massive. And it has led to the disproportionate rates of infection and deaths in the Black and brown community. One of the things that I’m most proud of, that we stood up, in response to these dire statistics, was a racial equity rapid response team. We initially started it up at the time when we were seeing Black deaths be seven times the amount of any other demographic. Unfortunately, what we’ve seen also is an increase in the amount of cases in the Latinx communities. Now we’ve, I think, brought the Black deaths down, we brought the case rates down, we still have challenges in the Latinx community. But what this has taught us is to really build a table of community partners who are helping lead the city’s response in these particular neighborhoods. And it’s been a tremendous, I think, learning experience for myself and my team about how to really deepen partnerships and build capacity within communities to help the communities really lead the effort.

Brancaccio: I want to talk to you about another one of the four prongs of the plan to end poverty there within a generation, maybe 20 years. I mean ways the city of Chicago can help people or communities build wealth. I mean, that’s about having a net worth, that must be about real estate, in part.

Lightfoot: Absolutely. Building wealth is critically important to the overall health and well-being of our city, and we’ve done a number of things already going down this very important path, where we have taken 10 commercial corridors on our South and West Sides — those are in Black and brown communities — working with local stakeholders, we’ve invested and will invest $750 million over three years, and we’ve attracted private capital. That work was delayed during COVID, but we’re now back at it.

Really, what we need to do is focus and bring attention on the wealth that already exists in these communities. There’s a neighborhood on the West Side, it’s called the Austin community. It’s where, back in 1968, following the death of Martin Luther King, there were riots and really businesses and homes were burned to the ground. That area literally has not come back since 1968. And a lot of people think of it as just a place that’s poor, a lot of gangs and violence. But what we found is that every single year, residents in that neighborhood spend $250 million in a neighboring city. And why? Because they don’t have the amenities in their own neighborhoods, like grocery stores, like restaurants, like pharmacies and banks. So that’s what we need to focus on. That’s where the city itself, I think, adds value. We can’t solve every problem, but we can certainly build strategies and help neighborhoods build capacity so that those issues and challenges can actually be addressed. And that’s what we’re doing.

Brancaccio: So a business development issue for sure but also, I get the sense, a personal finance issue. I mean, Chicago is not alone, but certainly in Chicago, redlining — people didn’t have the access to mortgages that other people had. And that also applies to other ways that people apply for credit.

Lightfoot: There’s no question. And there’s been recent studies put out looking at the top banks across Chicago, and I think it was actually a national study. And it’s embarrassing, and I’ve heard from the CEOs of many of those top banks committing to doing better in the city of Chicago. It should not be a thing that your race, as opposed to your personal net worth, determines whether or not you can get a mortgage. That is something we have to aggressively call out and eliminate if we’re going to be a city that gives people a stake in the future. I’m all about making sure that we start the process of increasing our population to 3 million. I’m very worried about the exodus of people from our city, particularly Black and brown working- and middle-class families. But if people don’t feel like they’ve got a stake in the future, and we’re not creating a space for them — and homeownership is one of the big important ways — they are going to continue to leave and think that their future lies elsewhere. So this has got to be one of those all-hands-on-deck moments — of the government and the private sector, philanthropy, community-based organizations — really focus on neighborhood-specific, down-to-the-block strategies. That’s what success we’ve seen here and elsewhere. It’s got to have that particular kind of focus.

Brancaccio: So as you pursue this plan to end poverty, you’re also battling, not just inequality, there has been a trust issue there. I mean, residents, I’m told often, feel the people who’ve run their city have been self-dealing, self-serving, in some cases actually corrupt. And then the city comes by saying, “We want to help you end poverty,” it gets in the way.

Lightfoot: There’s no question. The corruption tax, as it’s been, I think, correctly called here, really has real consequences. But that’s why it can’t be about the city coming in and saying, “Hey, we have a plan.” Even if it wasn’t a trust factor, people want to feel like they have a stake, that their lived experience is actually being reflected in the policies that we create. If we’ve learned nothing, and I think we’ve learned a lot through this COVID crisis, making sure that we are listening to the needs of residents, the needs of local stakeholders and helping them with the tools that they need to build capacity and solutions that are locally-based and locally-owned, that is the most effective way to get anything done.