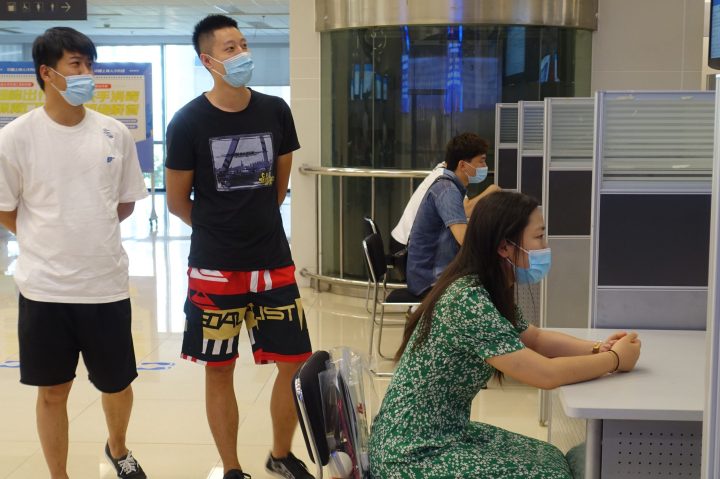 COPY
Students at a job fair in Shanghai. An estimated 8.7 million graduates could enter the workforce this year during the pandemic. Charles Zhang/Marketplace
COVID-19

Students at a job fair in Shanghai. An estimated 8.7 million graduates could enter the workforce this year during the pandemic. Charles Zhang/Marketplace
Listen Now

Qiu Chuangjia, 22, will soon start job hunting. He graduated with a major in visual communications design and production in June.

In the meantime, he reads, plays video games and occasionally writes a blog on WeChat, which is the app for everything in China.

His last blog post, which includes a song about the Peking opera by pop stars Coco Lee and Jay Chou, has attracted just over a dozen views and no advertisers.

But having a registered WeChat blog means he can officially be considered employed.

“Who knew opening a WeChat blog could be considered employment? I mean, seriously,” Qiu said.

The Chinese education ministry recently expanded job categories for graduates to embrace new industries. Starting this year, graduates who start an online shop, register for a WeChat blog account or play competitive esports can be counted as self-employed.

The announcement comes as Chinese officials are concerned about the job market during the pandemic. Qiu is among a record 8.7 million university graduates in China this year. The Chinese Communist Party has ordered government departments, state firms and the army to recruit more graduates. It has also given subsidies to private companies to hire new job seekers.

However, the latest government announcement, that bloggers and esports players are to be considered self-employed, has been widely mocked online.

“If registering a WeChat blog is considered employment, then if Chinese censors ban the account, will this be considered unemployed or fired?” user Allen wrote on Weibo, China’s popular social media site.

“I estimate the [graduate] employment rate this year will be at least 98%,” Weibo user Jinlun wrote.

The comment is not an exaggeration. Elite colleges in China consistently report nearly all their students find jobs right after graduation, even as the Chinese economy has slowed down in the past few years.

China’s education ministry says it has found instances of colleges falsifying employment contracts for graduates. It did not name any schools or indicate how widespread these practices are.

“If registering a WeChat blog is considered employment, then if Chinese censors ban the account, will this be considered unemployed or fired?”

Take the case of Lily Zhang, who graduated from a top Chinese college in June.

As she was leaving, she said she had to fill out a so-called “employment destination” form.

“One of options on the form was ‘freelance.’ Our counselor asked if he could write I was a blogger and I refused because I don’t intend to be one,” Zhang said. “I finally told him to put me down as a writer and signed the form.”

Such forms, according to local media, have in the past been used by colleges to inflate the employment rates of their graduates.

The education ministry said it is tackling the problem and has warned colleges against falsifying employment data. Schools cannot coerce graduates to sign labor contracts nor withhold graduation or degree certificates from students who do not have proof of employment.

Behind the rosy statistics is a harsh reality.

Graduates are having a hard time finding work, and the COVID-19 outbreak has made things worse. Many companies had a hiring freeze at the start of the pandemic.

When Tony Lin and his girlfriend returned to China after their studies in the United Kingdom, they had to live off their savings for a while.

“We struggled for a really long time, until around March and April,” Lin said. “Our savings nearly burned out. … We could only survive for another two to three months.”

Then, when companies started hiring again in the spring, Lin said the salaries were lower compared to last year by about $1,700 annually.

Luckily, Lin found a job in education consulting in Shanghai.

However, his girlfriend, Wendy Wan, has not secured employment. Both she and Lin have master’s degrees from the U.K., highly coveted by most Chinese families. But Lin said foreign degrees do not automatically give graduates an edge in China’s job market anymore.

Lin said it has been tough to watch his girlfriend struggle.

“Every time when she fails to get a job, you have to go through the process of seeing her really depressed,” he said.

Wan said part of the problem is that she got the wrong education advice.

“I wanted to study in Japan and upgrade my technical school diploma to a bachelor’s degree, but then an education agent told my father that in the U.K., I could get a master’s degree fast, within a year,” Wan said.

As with most Chinese families, her parents did not go through higher education. Wan said her father assumed it is always better to pursue an advanced degree.

“My dad and I had the same objective, which was to continue my studies, but as for my major and which country I would study in, I wasn’t allowed to decide.”

Wan has attained a master’s in international business from Birmingham City University, a pretty decent school compared to most colleges in China. However, after reaching out to some 400 companies, she still does not have a job.

Wan said apparently, jumping from a technical school diploma to a master’s degree is just not done in China’s system.

“I got some job interviews because I have a master’s degree, but when employers saw that I had a diploma and not an undergraduate degree, they stopped talking to me,” Wan said.

As for graduate Lily Zhang, she has applied for more than a hundred jobs and is about to sign an employment contract.

“A person’s future depends on him or herself and not the economic environment,” she said.

Zhang’s advice to the graduating class of 2020: Hang in there.