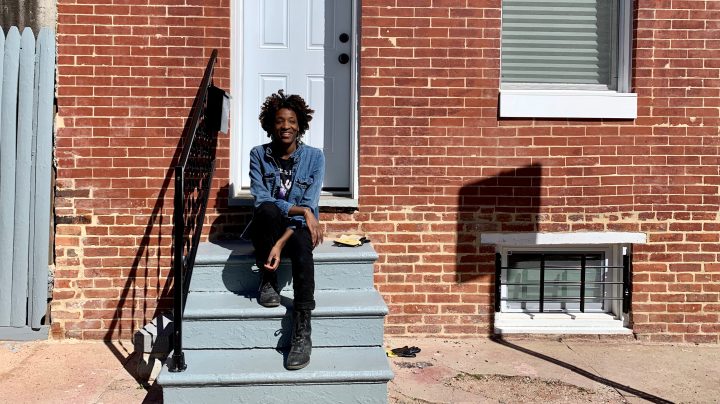 COPY
At 28, Quanshay Henderson bought her first house — and helped restore it — through Black Women Build. Amy Scott/Marketplace
The Block

It was Sunday morning, and Quanshay Henderson wore jeans, work boots — and a mask, though not for the reason we wear them now. This was in early March, before the coronavirus pandemic had really arrived in Baltimore. Henderson was suited up for a cleaning party.

She’d invited more than a dozen friends, family and co-workers from her job at the Maryland Health Department to help clear away the trash from an empty lot on a mostly abandoned block in Druid Heights, a neighborhood in west Baltimore. “You don’t know what you’re going to run into out here,” she said.

Wearing masks, double gloves and shoe covers, her makeshift crew filled a dumpster with everything from old hoses to fallen branches to dirty blankets.

And it was a celebration. At 28, Henderson was about to become a homeowner on this block, the first in her family.

“This is just a great feeling, to have so many people come out in support of this,” she said.

Including her mom, Yolanda Betts.

“I’m so proud of her,” said Betts. “She beat me to the punch.” Now Betts would have somewhere to go, she joked. “And the fact that she worked to help rehab the house, so that makes it a little more special,” she said.

Henderson was buying her new place through Black Women Build – Baltimore, a nonprofit that buys abandoned houses, works with Black women to restore them and then sells the houses to the women at affordable prices.

Inside the small row house, Henderson pointed out the white kitchen cabinets she installed, the freshly painted bedrooms and the heated floor in the bathroom.

“It’s like my feet are being kissed,” she said.

Her new home is a long way from the public housing Henderson grew up in, with her seven brothers and sisters.

“It takes my breath away, really, when I think about where I came from, and where I am now and then where I plan to go,” she said. Henderson was also the first in her family to graduate from college and to travel outside the country. Like those firsts, she said, “this will literally change the trajectory of what my siblings can think is possible, because now they see it.”

And that’s why Black Women Build exists, to change the trajectory of Black women by helping them build wealth through homeownership.

“It’s the way that you enter the middle class,” said Shelley Halstead, the group’s founder and executive director. “I came from a family that owned their own home, and that security, it was never questioned for me, and I want that to be a part of as many Black women’s lives as possible.”

One of the consequences of structural racism in the U.S. economy is the persistent gap between Black and white homeownership. In the second quarter of this year, 47% of Black households owned their homes, compared to 76% of white households. And yet, in majority-Black communities like Baltimore, there are thousands of houses just sitting empty.

Halstead, 50, moved to Baltimore five years ago from Seattle, where she’d had a long career as a carpenter. She was stunned by what she saw: “These houses that were completely falling in on themselves, you know, walls bowing outward and windows missing.”

And yet, they were beautiful — century-old, brick row houses with big windows and ornate cornices.

She found what she thought would be the perfect block on Etting Street, with modest two-story houses that would be affordable for first-time buyers. Most of them had been abandoned for years and were owned by the city. But her discovery came too late. By the time she met with city officials to talk about buying them, the houses had been slated for demolition. In a few days, they’d be rubble.

Even so, Halstead made her pitch: She would rebuild the block, rehab 10 houses and fill them with Black women homeowners. They’d create a whole community, with a shared garden and tool library.

“Sorry,” officials told her. The bulldozers were already lined up. Maybe she could find another distressed block to turn around.

Then, later that day, Halstead got an email giving her the go-ahead. “They found the wiggle room, and I was like, ‘We will buy them. Let’s start fundraising.’ ”

She bought four houses for $5,000. Total. Only one of them had a roof. All Halstead needed now was her first buyer/builder. She called a local construction training program and found Henderson, who already had a master’s degree in public health but wanted to learn to build.

For 4½ months, Henderson and Halstead worked side by side. They knocked down walls, built a new staircase, put in skylights. Henderson became a whiz with a nail gun.

“I think most of the hard work is in your head,” she said. “It’s all mental.”

Actually, some of the hardest work turned out to be financial. After the rehab, the plan was for Henderson to buy the house from Black Women Build for $80,000, roughly the cost of the work. She had steady income from her job at the Health Department and as a part-time hospice aide. But when she applied for a mortgage, the bank turned it down based on the appraisal.

“They were saying that the appraisal price was too high for the location,” Henderson said. “It’s almost exclusively abandoned houses.”

And that’s a big part of why Baltimore still has more than 16,000 vacant buildings and why it’s so hard to turn around blighted neighborhoods all over the country. It costs more to renovate these houses than the market says they’re worth, Halstead said, so banks and investors don’t want to take the risk.

“Which is why a nonprofit has to do it,” she said. “We’re not getting how much we put in.”

Ultimately, they proved to the bank that the block was the rise, and Henderson got the loan, along with some grants for down-payment assistance. Her mortgage payments worked out to $645 a month. All that was left was to sign the papers. But by then, the pandemic had changed everything. No one could come to her closing. She couldn’t have a housewarming party.

“It didn’t feel like a happy, happy moment,” she said. “It felt more like a business transaction to me. All of the excitement has kind of lost its place.”

But she’s been settling in. She bought a pale green loveseat and set up her sewing machine. And she’s getting used to being one of just a few people on her block.

And she won’t be lonely for long. She’s starting another master’s program, in social work, in the fall. Black Women Build has begun construction on the other three houses and is working to buy several more. And Halstead has recruited the next two homeowners to move in.

“It’s going to be a block that’s alive,” Halstead said. “That feeling of trust and that feeling like we’re in it together, that’s what I want there. And I think it’s on its way.”