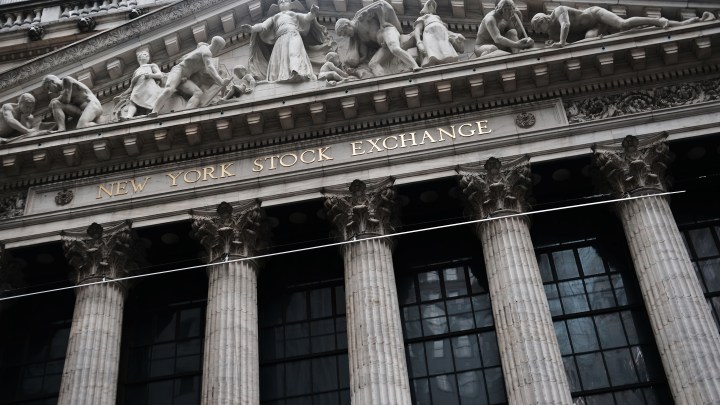 COPY
The Trump administration is recommending a plan that Chinese companies with shares traded on U.S. stock exchanges must submit to audits or else give up their listings. Pictured: The New York Stock Exchange. Spencer Platt/Getty Images

The Trump administration is recommending a plan that Chinese companies with shares traded on U.S. stock exchanges must submit to audits or else give up their listings. Pictured: The New York Stock Exchange. Spencer Platt/Getty Images
Listen Now

Open your books to U.S. auditors or get off U.S. stock exchanges. That’s the message from the Trump administration to Chinese firms listed in U.S. stock markets, which have until January 2022 to comply.

Marketplace China correspondent Jennifer Pak in Shanghai is following this story. The following is an edited transcript of her conversation with host Sabri Ben-Achour.

Sabri Ben-Achour: What’s behind this plan?

Jennifer Pak: Right now, Chinese firms can raise a lot of money on the U.S. capital market. But U.S. regulators cannot access the financial audits of those companies. And that’s not fair, according to Treasury Secretary Steven Mnuchin. So he wants Chinese firms listed in the U.S. to allow their books to be examined by a special audit regulator or else give up their listings. Mnuchin says this is about protecting investors from risky Chinese firms, which China doesn’t buy at all.

Pak: There’s actually a law in China thta prevents its citizens and companies from sharing audit documents with overseas regulators unless there is approval from the Chinese market supervisor and government bodies. Chinese officials have cited national security concerns.

Ben-Achour: How does China defend the fact that it treats U.S. firms one way and wants to be treated a different way?

Pak: China never directly addresses this but the government believes every country can set their own rules and the line here is Chinese companies must obey the laws in where they operate. In the case of the U.S.-listed Chinese companies, there is a conflict between Chinese and American rules, but China’s Ministry of Foreign Affairs said today Chinese auditors have worked with American regulators on a number of fronts, and that this dispute isn’t about accounting, it’s about forcing Chinese firms to delist. China’s foreign ministry also said that if that is the goal, this will severely hurt U.S. investors.