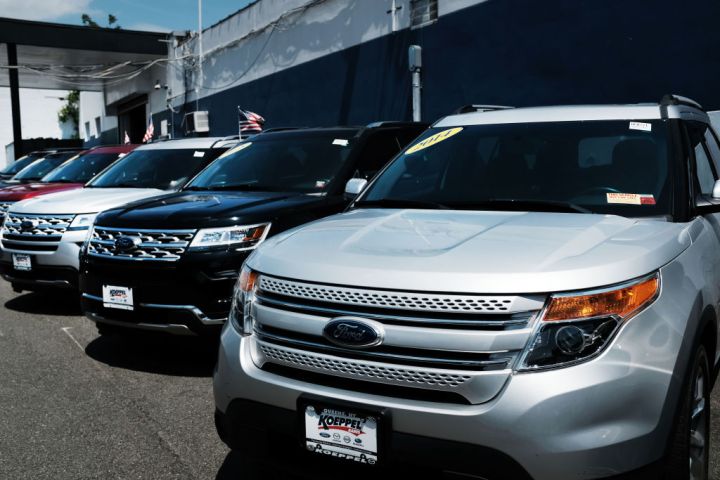 COPY
Analysts say this could be one of the most difficult quarters for carmakers in modern history. Pictured: Cars for sale at a Ford dealership in the Queens borough of New York City. Spencer Platt/Getty Images
COVID-19

Analysts say this could be one of the most difficult quarters for carmakers in modern history. Pictured: Cars for sale at a Ford dealership in the Queens borough of New York City. Spencer Platt/Getty Images
Listen Now

Industry watchers will learn more this week about how the coronavirus has affected the auto industry, as the big players report their second-quarter earnings. GM on Wednesday morning released its results, posting a narrower-than-expected loss.

The pandemic forced Ford, GM and Fiat Chrysler to close factories and halt production. At the same time, people stopped driving and buying cars while they were under stay-at-home orders.

Analysts say this could be one of the most difficult quarters for carmakers in modern history.

“I’d describe it as a roller-coaster ride that the auto industry has been on,” said Jessica Caldwell, executive director of insights at Edmunds. “I would say that at the end of March, early April, was definitely the darkest period.”

Automakers, trying to stay afloat, offered some of the best deals in decades, like 84 months of interest-free financing.

“We saw sales kind of come back because of the incentives,” Caldewell said, “to the point where now we’re facing inventory shortages because the factories were closed down.”

Despite those crests and troughs on the roller coaster of sales, the overarching picture is a steep drop. Sales for the whole year are forecast to be around 14 million vehicles, down from pre-pandemic estimates of 17 million.

Ford is forecast to report the biggest loss of around $5 billion for the second quarter.

The start of 2020 was supposed to be a great time for Ford, with the launch of a new F-150 pickup, its best seller, and an all new version of a much loved classic, the Bronco SUV. Those launches had to be held virtually, online.

“It’s certainly risky,” said Nick Shields, analyst at Third Bridge, an investment research firm. He said Ford will likely have to spend more than usual on marketing and advertising costs.

SUVs and crossovers have been top sellers for a while, but the pandemic is likely to accelerate the death of the sedan. Rental companies were big customers, but they won’t be replacing their fleets as quickly while travel is still limited.

“There’s been so much damage to consumers with all the job losses and furloughs in the U.S. that we think consumers are going to favor used-vehicle purchases for the foreseeable future,” said Garrett Nelson, analyst at CFRA.

He said that’s good news for used-car dealers, and also car parts suppliers, as people look to keep older vehicles running. It’s not so great for the automakers looking to sell new cars and trucks.