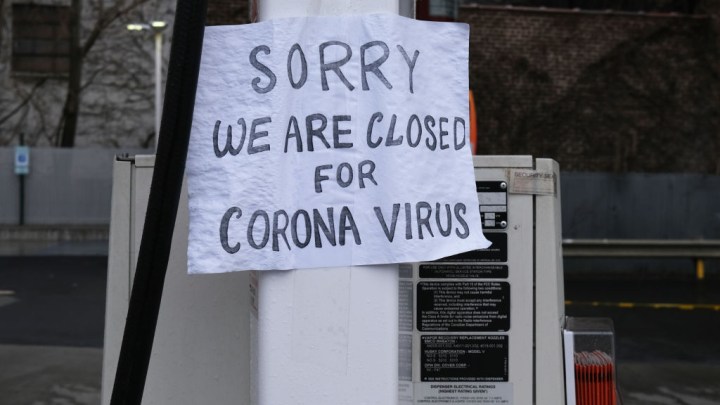 Nogales is a little Arizona border town — and a big port of entry for Mexican produce and goods. Only about 20,000 people live there, and plenty of them know Olivia Ainza-Kramer.

“My daughter doesn’t like to go with me to Walmart because I just always run into people,” said Ainza-Kramer, president of the Nogales-Santa Cruz County Chamber of Commerce. “But it’s part of the job, and that’s why I do it. I love interacting with people. I love talking to people.”

Ainza-Kramer used to spend her days running around town, dropping in on restaurants and hair salons — and finding ways to bring business owners together. COVID-19 changed all that.

“We didn’t realize how much we thrive on in-person meetings, on going in for a hug. You know, Latinos, we hug and kiss when we see each other,” she said. “And now to not be able to do that, it’s flipped the script in how we operate. “

The pandemic has flipped the script for a lot of the country’s thousands of local chambers of commerce. While lots of people may think of their local chamber as the group that sponsors the town Christmas tree lighting or fireworks on the Fourth, their real work is to promote and lobby on behalf of local businesses. That can take different forms depending on the state of the economy, which is rapidly changing during the pandemic.

The change in Nogales has been driven mainly by the shutdown of the border. The many Mexicans who typically come across to shop and go to restaurants provide a big source of revenue for small businesses. And with the border closed, that business has started to dry up. So now those businesses have to pivot to attract local residents, who, Ainza-Kramer said, tend to favor big retail chains. “A lot of small-town folk, they’re so stuck in their day-to-day routine that stepping outside of the lines is uncomfortable, just exploring their town,” she said.

A thousand miles north in Casper, Wyoming, businesses were hurting before the pandemic even hit. This is oil-and-gas country. And energy prices had been on the decline even before people pretty much stopped driving.

So far, Wyoming has had a relatively low infection rate compared to many places in the rest of the country. “The joke out here is we’ve been practicing social distancing since we became a state,” said Erin Morgan, executive director of the Casper Area Chamber of Commerce. “It’s kinda like, oh yeah, we’re pretty spread out.”

Still, Casper is the state’s second-largest city, with an active business district and a steady stream of tourists passing through on their way to places like Yellowstone National Park.

It’s why a lot of Morgan’s job used to be planning big events like a recent chamber fundraiser. “That was a crab feed. Being landlocked in Wyoming, it was pretty interesting to coordinate all that,” she said. “But we had about 450 people came, and the crab was all flown in from Alaska.”

Since the pandemic began, she’s gone from coordinating crab to coordinating PPE, or personal protective equipment. The chamber has become a local distribution site for face masks and hand sanitizer. With businesses already reeling, restaurant and shop owners want customers to feel as comfortable as possible.

Just about everywhere, the work of being a chamber CEO has become as unpredictable as the pandemic itself.

When the virus hit, Karl Benson, president of the Minnesota Black Chamber of Commerce, focused on helping Black-owned businesses get their share of Paycheck Protection Program loans. “If you don’t have a relationship with a bank at that point, you’re not in line at all, you’re not going to get in line,” he said.

But since the killing of George Floyd by Minneapolis police and the protests over racism and inequality, Benson’s also become something of a diversity adviser. He’s been fielding calls from a lot of businesses, including Fortune 500 companies. Minnesota is home to 16, including Target and 3M.

“I won’t name names, but it’s more, can you talk to our employees about how we should be looking to hire? What this diversity, equity, inclusion should look like?” he said. “It’s just been one after another. Like I hang up and pick up another one.”

The pandemic hasn’t just put stress on the longevity of local businesses, but on the chambers of commerce that serve them because they rely mainly on membership dues to stay afloat.

“I have an office, I pay rent, I have a staff of eight. We have expenses,” said Quincy Hentzel, CEO of the Portland Regional Chamber of Commerce in Maine.

The town’s been slammed by the drop-off in tourism. Hentzel’s cut people’s hours and started offering membership discounts. “Now is not the time for chambers to go away,” she said.

Like everyone else, she’s just trying to figure out how to keep the doors open.