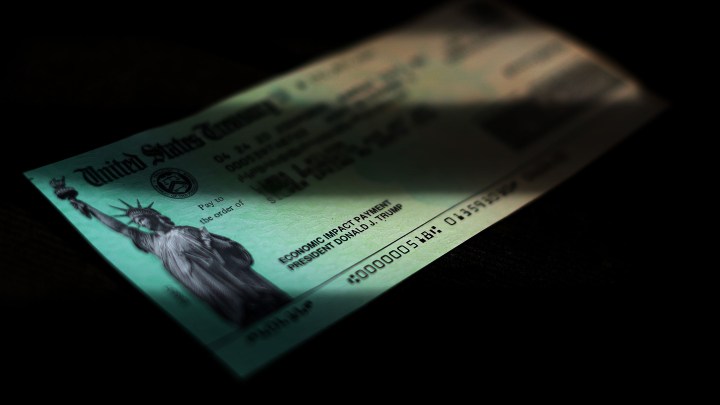 One way to make sure more people get their payments if their is a second round is to consider prepaid debit cards instead of Treasury checks. Chip Somodevilla/Getty Images
COVID-19

One way to make sure more people get their payments if their is a second round is to consider prepaid debit cards instead of Treasury checks. Chip Somodevilla/Getty Images

The Senate is back in session this week after a two-week recess. It is considering the next coronavirus relief package. Republicans and Democrats disagree over the size of the next round of direct cash payments, and who should get them.

But in the background here, some people still haven’t received the first economic relief payment Congress authorized back in March. A new study by the Urban Institute found racial disparities in whose checks were delayed.

One of the authors of that study, Janet Holtzblatt, is a senior fellow at the Urban-Brookings Tax Policy Center. She spoke with Marketplace’s Sabri Ben-Achour, and the following is an edited transcript of their conversation.

Sabri Ben-Achour: You found clear racial disparities in the data. Black and Hispanic people were less likely to have received their payments by late May than white people. Why?

Janet Holtzblatt: To some extent, part of that had to do with limitations and restrictions in the law. The group that had the lowest participation in our study were Hispanic adults who had non-citizens in their families. Under the CARES Act, people were not eligible for the economic impact payments if they were undocumented.

Ben-Achour: Congress, as we mentioned, is considering a second round of payments. How can the process be amended this time to reduce all these kinds of disparities?

Holtzblatt: I think one important aspect would be to really require the Treasury Department, IRS to provide the option of sending the money through prepaid debit cards. They tried that, but many of them received them and tore them up thinking it was junk mail, because there was no logo on the envelope or on the prepaid debit cards that indicated they were coming from the Treasury Department. It had the name of a private vendor.

Correction (Jul. 20, 2020): A previous version of this story misidentified the organization that released the report. The text has been corrected.