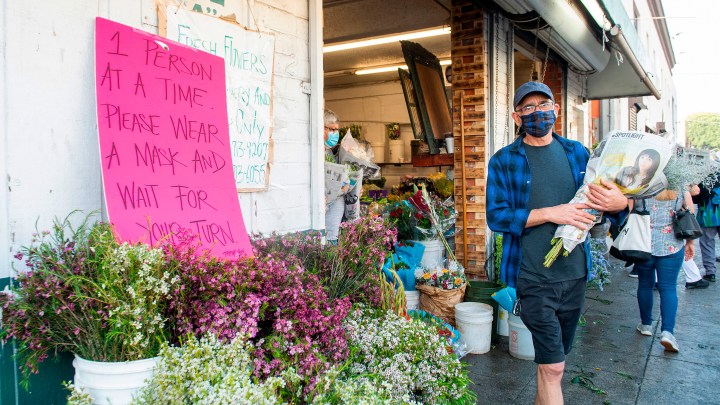 COPY
A flower shop owner picks up supplies at the Los Angeles Flower Market soon after its reopening in May. Valerie Macon/AFP via Getty Images
COVID-19

A flower shop owner picks up supplies at the Los Angeles Flower Market soon after its reopening in May. Valerie Macon/AFP via Getty Images
Listen Now

Back in May and June, it looked like the economy might be pulling itself out of the doldrums pretty nicely. Businesses were starting to reopen, consumers were venturing out, workers were headed back.

But that was before COVID-19-related hospitalizations and deaths had starting to rise again. Now that they are, and officials in the South and West are shutting businesses down to stop the spread, rumors of the economy’s resurgence may have been premature.

There are a couple indicators showing the reopening recovery has stalled.

Nick Shields, an analyst at Third Bridge, follows retail foot traffic. It picked up in May. But now the resurgence of COVID-19 is taking a toll.

Same story with jobs. Postings at the employment site Glassdoor are down 6% since the end of June.

So what kind of “recovery” does all this leave us with?

“We’re going to be seeing a W-shaped recovery,” said Camilla Yanushevsky, who tracks the consumer economy at CFRA Research.

That means trending down sharply, turning up a bit, then turning down again for the second half of the W. Yanushevsky said that’s probably where we are now.

“These reclosings, they’re driving consumers to be even more anxious about potential exposure,” she said. “It’s this fear that’s the biggest roadblock to any near-term sustainable improvement.”

All this fits with what independent florist Brooke Wetzel is seeing in her business. She said the giant wholesale flower market in downtown Los Angeles is operating sort of normally.

“Yeah, normal with mandatory face masks,” she said from the market.

Wetzel shut down in March and started up again a couple months later. She said folks still want to send flowers.

“People are still at home, and they can’t visit each other when they would’ve for a special occasion,” Wetzel said. “Babies are still being born. I mean, unfortunately people are still passing away. Everybody’s still having birthdays.”

Her business has been pretty good. But looking around the flower market, “I would say about three-quarters of the vendors are back, not everybody came back. They’re gone for good,” she said.