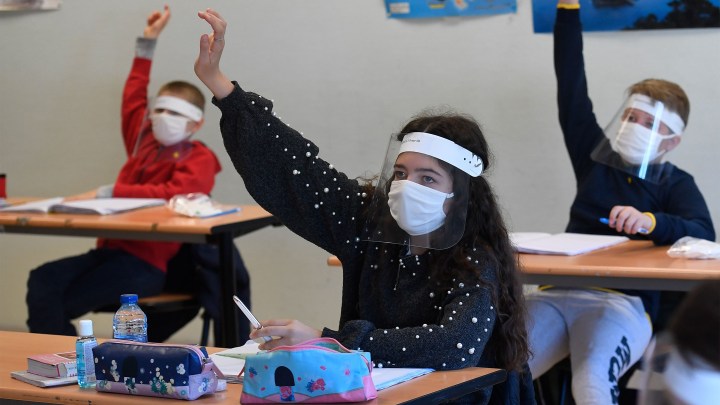 COPY
French schoolchildren wearing protective gear attend class in May. Will this year's purchases include face masks and hand sanitizer along with notebooks and pencils? Damien Meyer/AFP via Getty Images
COVID-19

French schoolchildren wearing protective gear attend class in May. Will this year's purchases include face masks and hand sanitizer along with notebooks and pencils? Damien Meyer/AFP via Getty Images
Listen Now

Back-to-school shopping is never easy for the Heritsch family.

If this were a normal year, the family would pile into the van — a 12-seater — and head to the Kohl’s near their town in Wisconsin.

“They would walk around and say, I want to get this, this, and this, and then we’d make them try it on,” said Paul Heritsch, their dad. “It’s a big event.”

Can you imagine it now?

“To keep all the kids wearing their masks and away from other people and not yelling to leave the store all at once — I expect it to be a big challenge.”

So they’re holding off for now because they’re also waiting to hear whether school will even happen in person this year.

The back-to-school season is one of the most important sales periods for retailers. But what does that mean when nobody knows if kids are actually going back to school in person?

In California, Jennifer Aldrich is taking the opposite approach. Her son, Devin, is 12 and goes to private school. He has grown a couple of inches during the pandemic and needs new uniforms, so she bought them recently for $700.

Even if school is remote this year, Devin’s uniform is made up of staple items, like khakis and white polo shirts. “So he could still wear them [at home] — if I can get him to,” she said.

Aldrich also bought supplies: pens, markers and notebooks. “I was concerned that if I didn’t do it now that there would be some sort of run on it,” she said.

Fair enough. We all remember the toilet paper shortages.

Janelle Domeyer in Nebraska sends her 14-year-old twin boys to private school too, but she’s in a different situation. Money is tight, and their school clothes will cost her about $350, so she’s waiting.

“As a single parent, I do the best I can with what I have,” Domeyer said. “And we’re not like hurting for anything, but $350 is quite a bit to set aside just for clothing and another $200, maybe, just for supplies.”

Meanwhile, in California, Kelly Hunsucker was at Target the other day and saw sales associates taking down the summer displays and putting out back-to-school supplies.

“I had to laugh,” Hunsucker said.

She’s not sending her three kids back to their schools, even if they are open.

“It seemed almost tone-deaf. And I know, Target, they have to, right? They have to operate like things may go back to normal.”

She’s right. At this point, retailers have already stocked up. Their only hope is that parents will buy the stuff.