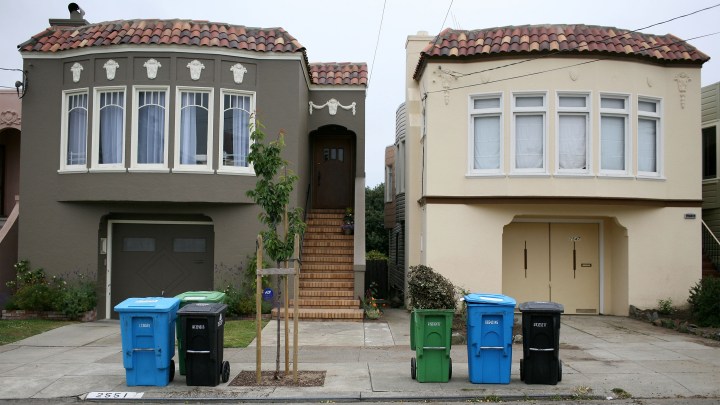 COPY
A neighborhood in San Francisco. Home values have only kept rising as buyers compete for a limited supply of houses. Justin Sullivan/Getty Images
COVID-19

A neighborhood in San Francisco. Home values have only kept rising as buyers compete for a limited supply of houses. Justin Sullivan/Getty Images
Listen Now

In the first quarter of the year, homeowners amassed a record $6.5 trillion in what is known as “tappable” home equity — that is, the amount of equity homeowners can borrow against and still have a 20% cushion. That’s the finding from mortgage data firm Black Knight.

And though the first quarter ended in March, just as the pandemic was really shutting down business, home values have only kept rising since then, said Black Knight’s Andy Walden, as buyers compete for a limited supply of houses.

“They’re seeing these record-low interest rates, and they’re out there shopping for homes and kind of sustaining those home prices out there in the market,” he said.

Meanwhile homeowners, perhaps spooked by the last housing downturn, have also been reluctant to draw down their equity through cash-out refinancing or home equity loans, and lenders are more reluctant to let them.

“Even those homeowners that are out there tapping into equity are leaving more meat on their bone,” Walden said. “They’re leaving more equity sitting in their homes and not fully tapping themselves out like we saw back in [2005-2008].”

That housing wealth leaves homeowners in better shape to withstand the current crisis. All that equity made it possible for Congress to let borrowers with federally backed mortgages defer payments for up to a year, said Susan Wachter, a finance professor at the Wharton School.

“A majority of Americans are homeowners, and for them, they’re not going to lose their home,” she said. “And in fact they can, if necessary, even draw on their mortgage by not paying” to cover other necessities.

The 35% of households that rent don’t have that luxury. More renters are losing their housing as restrictions on evictions lift around the country.

“It’s an extraordinary story of haves and have nots, where the system is set up to support homeowners, but it doesn’t protect renters,” she said.

“I would say it’s a correlation, not a causation,” he said. “People who are homeowners tend to have stronger financial positions, tend to be older, tend to have more education, higher income, higher wealth,” he said.

They also tend to be white. Black and Latino people are much less likely to own their homes, and their houses tend to appreciate more slowly, contributing to the wealth gap.