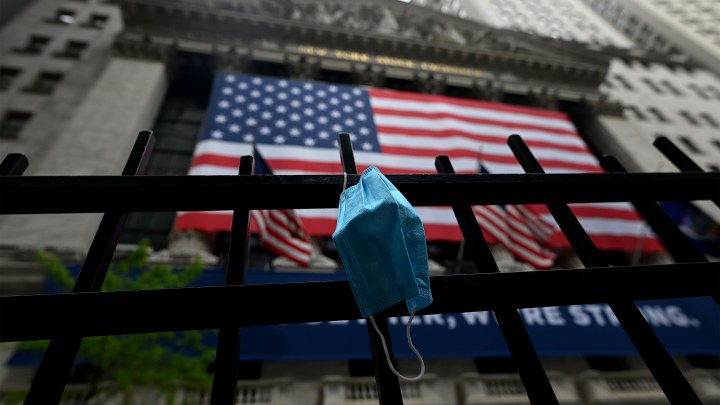 COPY
A face mask hangs on a fence outside the New York Stock Exchange. Corporate borrowing has slowed as companies reconsider the economic future. Johannes Eisele/AFP via Getty Images
COVID-19

A face mask hangs on a fence outside the New York Stock Exchange. Corporate borrowing has slowed as companies reconsider the economic future. Johannes Eisele/AFP via Getty Images
Listen Now

As the economy slowed down at the outset of the coronavirus pandemic, a lot of corporations opted to ride out the slowdown by borrowing up a storm. Corporate borrowing soared over the last few months as companies took advantage of low interest rates to pay their bills with borrowed money. But new data from the outfit Refinitiv shows that corporate borrowing dropped last week to its lowest level since early March.

When companies were piling on debt back in March, April and May, the economic picture was far from clear, said Steven Davidoff Solomon, corporate law professor at the University of California, Berkeley.

“But I think companies have a better idea of what’s going on now,” he said.

Solomon said some companies have an optimistic outlook. They’re looking at rising job numbers, increasing business activity and growth in the service sector — at least for now.

So instead of borrowing more, “companies are probably saying, look, we have enough right now. Let’s see where things go, and we’ll take it from there,” Solomon said.

Then there are companies that are feeling pessimistic. Collin Martin, a fixed-income strategist at the Schwab Center for Financial Research, said borrowing won’t help some companies make it through the pandemic.

“A lot of energy companies, when you look at retail companies, brick-and-mortar stores that were already deteriorating before this happened, clearly that outlook’s pretty negative right now,” Martin said.

He added that companies in those riskier sectors might be worried about defaulting on their existing debt.

“We’ve actually seen the number of corporate defaults pick up,” Martin said. “It’s actually been rising at the fastest pace since 2009.”

Then there are the cautious companies, borrowing less because they’re counting on an economic recovery later this year.

“What we’ll have to watch for is whether people that thought we’d get back to normal in the third quarter all of a sudden decide that that was a premature forecast,” said Jim Vogel, interest-rate strategist at FHN Financial.

And if the economy doesn’t improve, “we’ll see another round of borrowing as people have a better handle on what their own financial situation is,” Vogel said.

We’ll get a better sense of how much corporations are willing to borrow, Vogel said, as they report their quarterly earnings later this month.

Could the explosion of corporate debt lead to a new financial crisis?