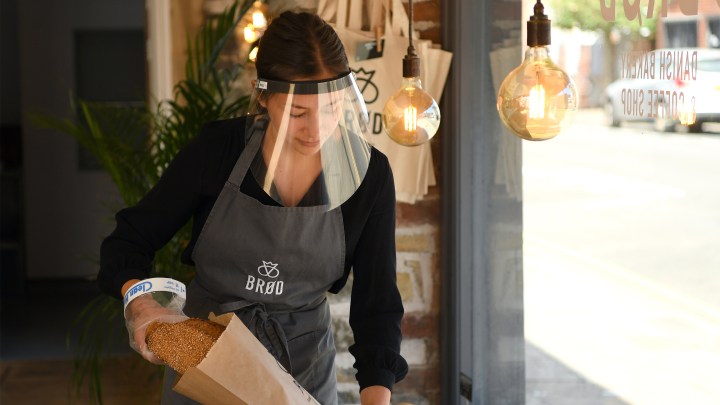 COPY
A worker fills a bread order at a bakery in Wales in June. British entrepreneurs are worried government intervention during the pandemic could dampen the country's innovative spirit. Stu Forster/Getty Images
COVID-19

A worker fills a bread order at a bakery in Wales in June. British entrepreneurs are worried government intervention during the pandemic could dampen the country's innovative spirit. Stu Forster/Getty Images
Listen Now

Britain — according to Forbes magazine — was the best country in the world in which to do business last year, the second year in a row that the Brits have won that accolade. Innovation and a lack of red tape were among the stellar qualities that the magazine identified as typically British.

But that was before the paralyzing effects of COVID-19 and the ensuing, unprecedented levels of state intervention in the United Kingdom’s economy. With more bureaucracy, more government involvement in business and perhaps with higher taxation, will the country be such a great place to do business in the months and years ahead?

Will the U.K.’s entrepreneurial spirit continue to thrive?

Of course, the ability to survive a disaster and to draw energy and inspiration from a setback are key characteristics of the true entrepreneur. Brie Read, 38, is a textbook case, although it must be admitted the calamity that launched her entrepreneurial career was hardly on the same scale as the pandemic.

“I was walking down a very posh shopping street in Edinburgh called George Street, and I started to feel my tights slipping down,” Read said. “Eventually, I felt them slip below my knees, and there must have been about hundred people who saw it.”

This humiliating wardrobe malfunction convinced her that ill-fitting tights were a widespread problem, and so she launched Snag Tights, a company making the garments to fit women of all shapes and sizes. Two and a half years after launch, the company turns over $2.5 million a month, employs 47 people and dispatches 10,000 pairs of tights every day to more than 90 countries.

The COVID-19 crisis, however, threatened to be the undoing of Snag Tights. Sales slumped by 75% and, since the company didn’t qualify for government assistance, it faced the prospect of running out of cash by July.

But, always fast on her feet, Read appealed online to her customers to keep the company alive, and she offered them two pairs of tights for the price of one, with delivery delayed until November. Inundated with orders, she now has more than enough cash to carry on.

“It was incredible. We went overnight from a huge risk to be a safe and stable business,” Read said.

The rebound did not surprise Fran James, founder of The Great British Entrepreneur Awards, an annual event that celebrates the art of starting up and running a new business. James said there have been countless examples of small companies adapting, changing tack, moving online and pivoting during the pandemic.

“I’ve been bowled over by the resilience that I’ve seen, by the creativity that I’ve seen and by the tenacity and sheer determination from the entrepreneurs that we work with,” she said.

But James admits that she’s in the celebration business. There are others who take a more jaundiced view of the impact the pandemic is having on the British spirit of enterprise. Economist Andrew Hilton is downbeat.

“I think you have to ask yourself: Who are the winners and who are the losers from the coronavirus pandemic and the lockdown?” said Hilton, head of the CSFI think tank.

Hilton believes that many small businesses, weighed down by the debts incurred during lockdown, will go bust. Or, if they survive, he said, they’ll face a far more challenging economic climate in the future. The massive intervention by the state — pumping hundreds of billions into supporting businesses and jobs — means that big government and much heavier regulation are on the way, and that will, inevitably, dull the edge of enterprise.

Predictably, the entrepreneurs are far more upbeat. Gavin Bell, who owns a small online marketing firm with a six-person team, is confident that his business will survive and thrive.

“In my opinion, it’s a waste of time worrying about higher taxes and heavier regulation,” Bell said. “What we should be focused on is how do we best serve our customers, and if we do that and become the best at that, regardless of the economic situation, I think we’ll always come out on top.”

And veteran entrepreneur Luke Johnson, who’s launched and invested in dozens of successful startups, forecast a rosy future for British enterprise in spite of the current gloom.

“The lockdown has been incredibly frustrating because entrepreneurs tend to be busy, active people who want to be doing things. The enforced idleness and the fact that a lot of these companies have been put into hibernation has driven them half mad. It certainly has me,” Johnson said. “But I hold out great hope that Britain’s entrepreneurs will rise again, deal with the challenges and move forward in a positive spirit.”

And what of Brie Read, the woman who turned a mishap with her tights into a multimillion-pound business? She is also defying the pessimism and is still shipping 10,000 pairs of tights a day in spite of her earlier brush with insolvency. But Read does seem to be more concerned that the U.K. could be headed toward a more bureaucratic and less entrepreneur-friendly kind of culture.

“I think that’s definitely always a worry,” she said. “We need to make sure the government understands that the freedom to trade, the freedom to do business, is a huge part of providing employment and keeping our way of life the way it is.”

Read said there is much more than the fate of entrepreneurs at stake. Millions of jobs are riding on this issue. Small companies like hers now employ two-thirds of the British workforce.