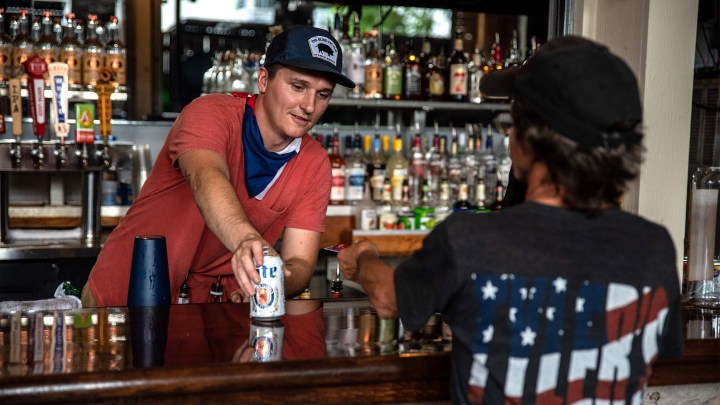 COPY
A bartender serves a drink to a customer at a bar in Austin, Texas, in May. Texas Gov. Abbott has singled out bars as the reason for a spike in COVID-19 cases in the state. Sergio Flores/AFP via Getty Images
COVID-19

A bartender serves a drink to a customer at a bar in Austin, Texas, in May. Texas Gov. Abbott has singled out bars as the reason for a spike in COVID-19 cases in the state. Sergio Flores/AFP via Getty Images
Listen Now

As Texas keeps setting records for the number of positive coronavirus tests — 20 days in a row now — Gov. Greg Abbott has hit the “pause” button on the reopening of the economy.

And he singled out one industry for the spike in cases: bars.

“If I could go back and redo anything,” Abbot said Friday, “it probably would have been to slow down the opening of bars, now seeing in the aftermath of how quickly the coronavirus spread in the bar setting.”

Abbott gave bar owners just three hours to shut everything down. That didn’t sit well with some bar owners. On Monday, more than 30 filed a lawsuit challenging Abbott’s emergency order, saying they’re being unfairly singled out.

One of the bar owners suing the state is Heather Vaughan. She owns the Crossroad Saloon in Big Spring where she employs about 15 people.

“We’ve got people that are single moms that take care of everything and the first shut down was just absolutely horrible for them,” she said.

“We’re trying to follow the rules as much as we can, you know? We just want to make a living and we are shut down,” she said.

Mostly shut down, but Vaughan is still trying to make a little money. Today, she’s opening the doors and “giving away” hamburgers. If patrons want to leave some cash, that’s their call.

“Donation-only because we can’t sell it,” she said.

She’s desperate because the first closure in March nearly did her business in.

In Abilene, Coy Chew owns the Whiskey Girl Bar, which stayed open past the Governor’s declaration on Friday. That bought Chew a 30-day suspension of his liquor license on Saturday and led him to join the lawsuit.

“You know, it’s not that we’re trying to make light of there being a virus out there. I just think that you either shut everybody down together or nothing at all,” he said.

In Austin, Bob Woody owns a bunch of bars on Sixth Street. He followed the new state orders to close but says he’s putting together his own coalition of bar owners to file a separate lawsuit.

“Given the opportunity to get in front of a magistrate and say, ‘Just prove to us that we caused it and we’re willing to shut down.’ That’s all I want,” he said.

The Texas Alcoholic Beverage Commission declined to comment on the lawsuit. The Governor’s office didn’t respond to an interview request.