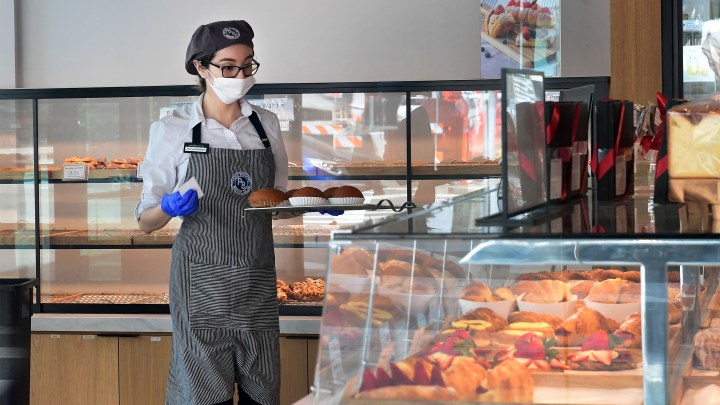 COPY
An employee at a cafe in Los Angeles in March. Work sharing is one solution to keep people employed during the COVID-19 recession. Frederic J. Brown/AFP via Getty Images
COVID-19

An employee at a cafe in Los Angeles in March. Work sharing is one solution to keep people employed during the COVID-19 recession. Frederic J. Brown/AFP via Getty Images
Listen Now

More than 40 million Americans have applied for unemployment benefits during this pandemic. Many businesses have shut down and laid off staff. But some economists say there’s a better way. It’s called work sharing. Only about half of states have work-sharing programs. The programs keep workers in their jobs, lets employers cut their hours and uses unemployment benefits to fill in their lost wages.

Frank Mullens is a big believer in work sharing.

“I have faith in the program, because I’ve seen it work,” he said.

He’s the chief financial officer for Los Angeles-based Marketing Innovations International. The company customizes promotional products for its clients — things like special key chains for graduation parties. Back during the Great Recession, Mullens helped enroll the company in California’s work-sharing program. And it saved jobs.

“We had four employees on that program, and all were very happy with the ability to keep their job, keep their benefits and try to get as close to full pay as possible,” Mullens said.

Now that business is down again, Mullens has gotten the company back on a work-sharing plan. California approved the company to keep 10 employees on the payroll with reduced hours. It’s a good outcome, Mullens said, but it wasn’t easy getting there.

“That the program requires a mailed-in application was the first frustration,” he said.

UCLA economist Till von Wachter said updates to state unemployment systems could get more employers on board with work sharing. He said by cutting hours instead of cutting jobs, companies can avoid painful layoffs and save on rehiring and retraining.

“There’s an ongoing relationship between workers and firms that would allow us to hit the ground running once the pandemic is over,” he said

But work sharing isn’t used very much. More than 200,000 workers in the United States are now getting benefits through work sharing. That is a notable jump from pre-pandemic levels. But it’s still just a tiny fraction of the tens of millions of workers who’ve applied for unemployment since the pandemic began.