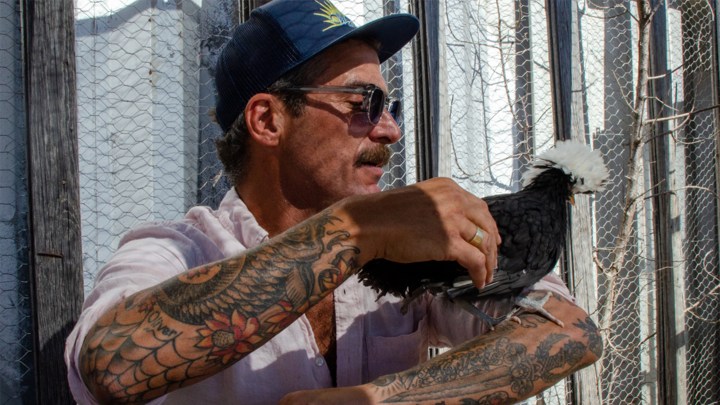 COPY
Douglas Friedman was stuck at home because of shelter-in-place orders, so he decided to raise chickens with a neighbor. Carlos Morales/Marfa Public Radio
COVID-19

Douglas Friedman was stuck at home because of shelter-in-place orders, so he decided to raise chickens with a neighbor. Carlos Morales/Marfa Public Radio
Listen Now

“Hello, I’m here to pick up chickens!” Kettyle said as she walked in.

From behind the front desk, the high-pitched sounds of about three dozen hatchlings echoed throughout the room. They were snugly packed in a cardboard box with air holes punctured all around. Kettyle had chicks growing up in Pennsylvania and later on in life. Ever since she moved to Marfa, she’s wanted to have some in the rural West Texas desert.

Normally, chicks are pretty easy to find at supply stores. But back in March and April, hatcheries across the country had a sudden surge in orders from new chick buyers. Some were pandemic-inspired, from people worried they wouldn’t be able to get eggs in the future. Others were just everyday businesses, ranchers looking to re-up their stock. But Kettyle was able to buy some for herself and a few other people from a supplier in New Mexico — $166 for 37 chicks.

While she waited for them to arrive, she put together a brooder, she got a heat lamp to keep her chicks warm and all the feed they would need.

“There’s a ton of stuff to do,” Kettyle said. “Plus we would’ve built a chicken coop from scratch, but we had an old shed in our backyard, so we just remodeled the shed into the Fort Knox of chicken coops.”

Down the street from Kettyle’s fortified coop, 82-year-old Herb Suber is hearing from new chick owners. “Constantly. They call me all the time,” he said at his supply-and-feed store in Marfa, which he’s run for decades.

“They’re babies! You got to take care of them. Keep them warm, fed and watered.”

Relative to new chick owners, Douglas Friedman seems like a bit of a professional after just three months. His chicken ranch, as he calls it, sits on a dusty hill just outside Marfa’s city limits.

“No one kind of prepares you for this,” Friedman said.

Friedman doesn’t have much work right now, and he was stuck at home because of shelter-in-place orders. So he decided to raise chickens with his neighbor. He’s got about 25, and they all roost in a coop he dubbed the Best Little Hen House in Texas on the Instagram account he started for it.

“What was so helpful about that Instagram page was that people that knew about chickens and chicken coops, they were all so generous with their knowledge,” he said.

Through “Chicken Instagram,” Friedman learned a few things, like how to prevent common health risks for chicks and how to take care of his coop.

“I don’t think I’ve ever had the experience of this type of responsibility like, you know, I want to make sure that nothing happens to these birds,” Friedman said.

He said the chicks have provided some routine and comfort for his day-to-day life now. When he wakes up, he said, he knows he has to get moving quickly. He needs to check on his chicks and feed them every morning, sometimes bringing them sliced cucumbers or carrots for a snack.

There aren’t any eggs just yet. That won’t happen until the chicks mature into hens in another few months.