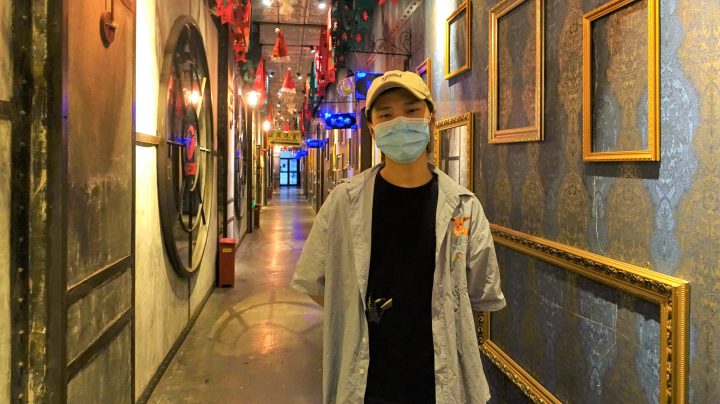 COPY
Zhang Lei manages an entertainment center in Shanghai, and for four months, he was not sure whether he would still have a job or not. Charles Zhang/Marketplace
COVID-19

Zhang Lei manages an entertainment center in Shanghai, and for four months, he was not sure whether he would still have a job or not. Charles Zhang/Marketplace
Listen Now

For more than two years, Zhang Lei, 27, has been working at an entertainment center in the northern part of Shanghai, some 300 miles from his home village in eastern Anhui province.

He has been working as an assistant manager at the venue, where people can sing karaoke, throw darts, play laser tag or complete a ninja course. It’s the type of place where the COVID-19 virus could spread.

Faced with these fears, the government made all entertainment venues, along with nonessential businesses, close down in late January.

Zhang was paid as normal that month and then received a basic salary in February, which is a third less than he normally takes home.

“Then in March, my boss said, ‘Maybe you should find a part-time job.’ That was when I realized the firm might be in big trouble,” Zhang said.

By April, he was placed on furlough. Faced with these setbacks, he did something unexpected.

“I’ve not traveled much since I started working, and since there were no part-time jobs available during the pandemic, I started looking up places that were not badly affected by the coronavirus,” he said.

At a time when most Americans are vacationing on their couches, Zhang packed a hat and swimming shorts. Then he flew to southern Hainan island.

“I mostly spent my time at the beach, surfing, swimming and shopping,” he said.

China’s official jobless rate has held steady around 6% since the COVID-19 pandemic struck the country. This figure is derived from the surveyed unemployment rate in urban areas, and some analysts say the methodology used under-represented the 290 million workers from the countryside who move to other parts of the country, usually cities, for better-paying jobs.

A report co-authored by a Chinese Academy of Social Sciences research fellow, Zhang Bin, estimates that between 70 million to 80 million workers had not resumed work at the end of March.

Research by Zhongtai Securities supports this and puts the unemployment rate at around 20%.

But unlike in the United States, where expensive cars have been seen outside food banks in wealthy New York suburbs, newly out-of-work people in China are able to pay their bills and sometimes more.

The one-week vacation Zhang took in Hainan island cost roughly a thousand dollars, which, for him, is a month’s salary but is less than the average wage in Shanghai.

So how can a person who didn’t get paid a regular salary for four months afford a last-minute beach vacation?

Part of the answer is that service workers like Zhang are often provided dorm rooms by their employers. He does not pay rent in pricey Shanghai.

Mostly, Zhang saves a lot — almost half his take-home pay.

The latest available data on savings in China comes from 2016. It shows the average household put away 36% of disposable income, compared to just 7% in the U.S.

“In the U.S., you could have a comfortable life with a job, a house and a car, but even if we have all that in China, we still feel insecure,” Yu Ting, an aesthetician in China’s Hubei province, said.

The 32-year-old said she saves for her daughter’s education, her own retirement and medical care for her elderly parents.

China may be communist, but under its health care system, people must still pay, and a big illness can bankrupt a family.

Yu said she usually saves at least 40% of her salary, which has come in handy during the pandemic.

The beauty salon where she works in Wuhan city put her on furlough from February through April while giving her a bit of money to cover food costs. Unlike in the U.S., where a lot of taxpayers received checks to help them through the pandemic, China’s Communist Party has mostly avoided direct handouts to workers and directed most of its efforts toward employers.

When Yu returned to work in May, her boss said he would cut benefits.

“We used to have rent, meal subsidies and overtime pay, but suddenly that all disappeared,” she said.

Left with just a basic salary, Yu decided it was not enough to survive on. She resigned.

“It was a layoff in disguise,” she said.

“My savings are enough to support me for a year.”

Like most people who move to the cities for work, Yu has returned home to the countryside to plan her next step.

“My mindset has changed a bit with the pandemic. I will definitely save more in the future,” Yu said.

Luckily, the apartment she is living in was paid off just before the pandemic hit, with a little help from her parents-in-law.

The Bank of Mom and Dad is usually the first place people in China seek help, even though most are big savers themselves.

A recent Marketplace-Edison Research Poll showed that 2 out of 5 Americans surveyed didn’t have $250 to spare for an unexpected expense, like a medical bill, at the end of the month.

”I don’t believe it. I think most Chinese families can easily take out $250 without a problem,” she said.

In fact, Yu said she is able to make her savings stretch and last for a year if she cannot find a suitable paying job.

Same goes for Zhang in Shanghai.

“My savings are enough to support me to live for a year,” he said.

Earlier this month, Zhang went back to work managing the entertainment center.

He even got a tiny raise from his boss, which will likely go into his savings.

For him, saving is a natural habit.

“My family is poor. Growing up, they could not afford to buy me things that I wanted. So when I started working, I saved money to travel and buy what I like,” Zhang said.

He also gives money to his mother regularly, which she usually saves on his behalf.

“My mother often brags to her friends about how much money I give her,” Zhang said.

It is a habit his mother said will fend off poverty and perhaps, one day, even get him a bride.