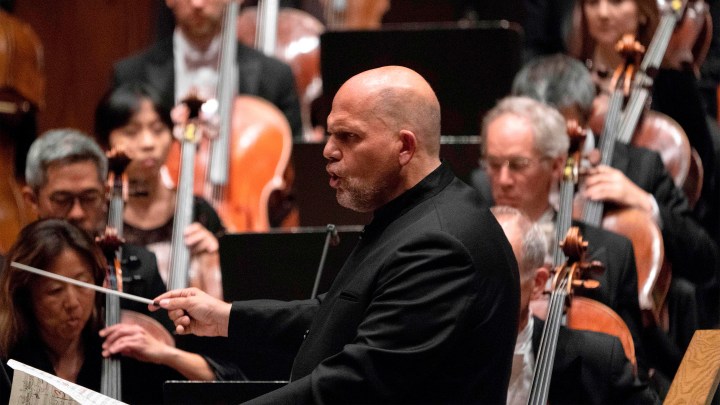 COPY
The New York Philharmonic performs in 2018. About 40% of revenue for performing-arts nonprofits comes from live events. Don Emmert/AFP via Getty Images
COVID-19

The New York Philharmonic performs in 2018. About 40% of revenue for performing-arts nonprofits comes from live events. Don Emmert/AFP via Getty Images
Listen Now

It’s a sign the arts world is coming to terms with the idea that performances may not happen for a while.

Every night at 7:30 eastern, the Metropolitan Opera streams a recorded performance. Today, it’s “Hansel and Gretel” — the fairy tale about a brother and sister lost in the woods.

Watching this from your couch in sweatpants doesn’t scream glamorous evening at the opera. But for dance, music and theater, this is, unfortunately, the way things might have to be for a while.

“I don’t think there’s any substitute to the live, in-person, nonvirtual events,” said Sunil Iyengar, the research director at the National Endowment for the Arts.

He said performing-arts nonprofits get about 40% of their revenue from ticket sales, concessions and gift shops. Streaming free performances online and asking for donations won’t make up for that. Companies already rely on donors for almost half their budgets.

“I think a lot of organizations are struggling with the issue of how to monetize these strategies,” Iyengar said.

Pamela Robinson, a professor of performing-arts administration at New York University, said some of this isn’t about making money now, but about attracting new audiences in the future.

“It’s really important to stay in touch with your patrons,” Robinson said. “Even after you open, that could open the doors to additional revenue and recognition.”

Robinson said one canceled fall season could impact companies for the next two years. There may not be money for new productions or splashy sets, and companies might have to rely on old standards.