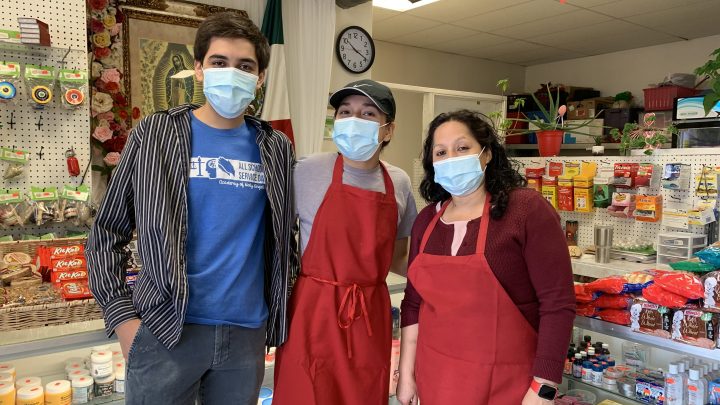 Jaqueline Reyes with son and daughter after cleaning up after their shop from damage in Minneapolis. Beth Pearlman/Marketplace
Race and Economy

Jaqueline Reyes with son and daughter after cleaning up after their shop from damage in Minneapolis. Beth Pearlman/Marketplace

The protests over the police killing of George Floyd, and long-term systematic police racism, that began in Minneapolis-Saint Paul in May have reached every state. Some protests have become destructive. Windows of shops and small businesses along protest routes have been smashed and buildings have been set on fire.

For the owners of small businesses it’s been a difficult experience. Coming off closures or reduced hours because of the coronavirus, many fear for the future of their businesses.

“I just really hope the country understands small business owners are your neighbors,” said Jack Stewart (no relation to this reporter) who owns an optical store with his wife in Buffalo, New York, which was ransacked. “We understand, and we stand with the cause, but when you reach out with violence, and steal, you’re taking away from the goal of the protest.”

In Minneapolis, Raja Samlai owns and runs an eatery called Moroccan Flavors. Her restaurant was vandalized, but the damage wasn’t too bad. “We have to protect our building, we have a lot of dreams in that building,” she said. “We are with people looking for justice, but we want everything peaceful.”

A few blocks away, Jaqueline Reyes, who owns Valerie’s Cariceria, said she’s scared, but is determined to reopen, despite her store being broken into and damaged. “We’ve been here 19 years, and we’re not going anywhere.”

More than 10 major cities across the U.S. have declared overnight curfews, and 23 states and D.C. activated the National Guard.

In Buffalo on Saturday night, rioting started near Stewart’s store after a day of peaceful protests. He got a call from the police telling him the store had been broken into. He turned on the local news. “We could see people were jumping in and out,” he said. The windows and glass displays were smashed, and glasses frames stolen.

Stewart boarded up the windows of his store the following morning, but said he wanted to put a positive message for the community on the boards. “My wife and I are really angry, but wanted to show this is not typical of our city,” he said. He hired a local artist to spray paint messages including “Stand Together BFLO” and “United and Strong.”

In Minneapolis, Samlai’s eatery is in Midtown Global Market, full of international food stalls and shops. She, and other business owners, stood outside for two nights in a row to defend the building. Because she and her family live in apartments above, she said they haven’t been able to sleep.

Samlai is worried about the long-term impact on her business. During the coronavirus pandemic she was able to stay open for curbside pickup, but now she’s closed. She’s concerned it will be a long time before customers come back. “The people are going to be very, very, scared.”

“We had a break in on Friday morning, at about 3:20 am,” said Reyes, who owns her carniceria on Nicollet Avenue in Minneapolis, with her husband, Jose, a butcher. They’ve been in business for nearly two decades and never experienced anything like this. They got an alert that the store’s alarm was going off. By the time they raced there the damage had been done. The store had been broken into, and tossed. It looked like someone had tried to start a fire, but it didn’t catch.

“From our video recording there were 10 guys in the store,” said Reyes. “We are peaceful people, we’ve been working so hard. We’re so sad, and angry.”

She and her family boarded up the store and the adjacent taqueria which they also own. They closed from Friday until Sunday, and told employees not to come in.

“We were home watching the news, and every time it showed our store, we were just hoping for nothing else bad.”

The business is only making around one third of what it did prior to the pandemic, partially because the cost of meat has been rising across the country lately, meaning her suppliers are charging more. Reyes said she does not want to pass the price increases on to her customers, but now that she’s had to cut the store hours out of worry that there will be more night time destruction,  she might have to. In the meantime, the family will file for insurance and focus on protecting their store.

Back in Buffalo, Stewart is also starting the process of filing an insurance claim but isn’t sure what exactly it will cover. “It’s a tough time to be a small business owner,” said Stewart. He’s worried every night that someone could break in again.

“It’s a never ending roller coaster,” said Stewart. “You really just have to take one second, and one minute, at a time.”