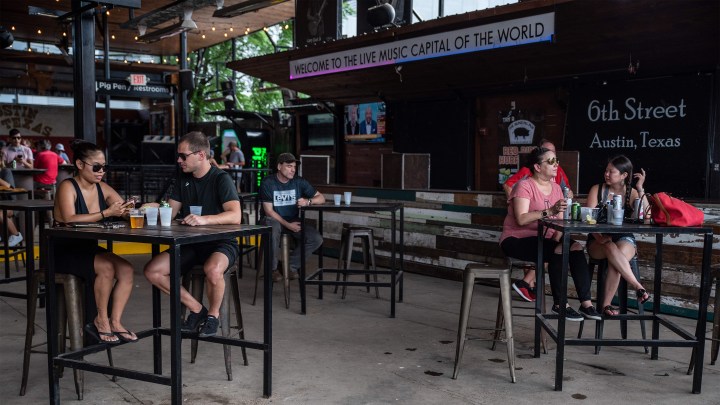 COPY
People listen to live music at the reopened Blind Pig Pub in Austin, Texas, on May 22. Sergio Flores/AFP via Getty Images
COVID-19

People listen to live music at the reopened Blind Pig Pub in Austin, Texas, on May 22. Sergio Flores/AFP via Getty Images
Listen Now

Mere minutes after opening its doors a week ago, the Blind Pig Pub was already filling up. This bar on 6th Street (an entertainment district kind of like Bourbon Street in New Orleans) has an outdoor dance floor and big rooftop patio.

“I think it is a little nuts,” 25-year-old Taylor Blount said just outside the Blind Pig. “It doesn’t seem like anyone’s social distancing. I mean, people are just kind of over it at this point, it seems.”

He said people are over the idea of avoiding 6th Street. Blount is not wearing a mask but said he was comfortable being out among the crowd. That’s good news for Bob Woody, owner of the Blind Pig, who said the bar has put some policies in place to help people feel safe.

“We get them to the front door, the doorman is wearing a mask or a shield, and he’s got a spray, and we’re gonna spray your hands. And if you don’t want to spray, you can go someplace else. But we’re gonna spray them because that’s our policy,” he said.

Woody said he just wants his bar to start generating revenue again. He’s not alone. According to the Texas Restaurant Association, honky-tonks and bars have lost at least $600 million in revenue after being shut down in the pandemic.

About a week ago, these businesses got clearance to open under certain guidelines from the governor: Bars should only operate at 25% capacity, tables should be 6 feet apart and hand sanitizer should be readily available. But bars are made for close interaction. Hanging out with friends and meeting new ones. Shouting to be heard above the din of clinking bottles and blaring jukeboxes.

Some bars on 6th Street opened the second they were allowed to.

But Craig Primozich, a partner in two Austin bars, Javelina and Nickel City, is going to wait a minute.

“We’re obviously motivated by the bottom line and to make the business sustainable, but we don’t need to be the first. Let’s see how the customer base is sort of responding and reacting,” he said.

How customers react could be the most important thing in determining what bars are gonna look like because the guidelines the governor issued aren’t hard-and-fast rules.

“Gov. [Greg] Abbott purposely used words like ‘suggest’ and ‘recommend’ so that there’s more interpretation and it’s not as hard of a hammer,” said Michael Klein, president of the Texas Bar and Nightclub Alliance.

In practice, it’s up to the individual bar to make sure people are safe.

“We’re expecting our bar owners to have a master’s in public health and figure it out,” said Dr. Peter Hotez, dean of the National School of Tropical Medicine at Baylor College of Medicine in Houston. He’s an expert in molecular virology and microbiology.

“What would be ideal would be if you know a business owner could call a hotline and ask someone to come out and inspect their facility and give them recommendations: OK, here, you should be doing X, Y and Z,” Hotez said.

For now, Woody at the Blind Pig Pub said he’ll do his best to follow whatever recommendations the governor’s giving him.

“I’ve made the promise that I will not close again. If you’re compromised in any way, get in a safe place. I’m going to open, and people can make a decision to walk past this place or come in,” Woody said.

He hopes to get his bar to at least half its pre-COVID-19 capacity by June 1. 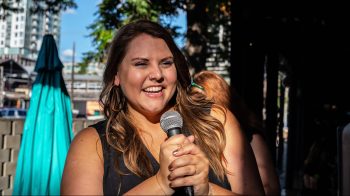