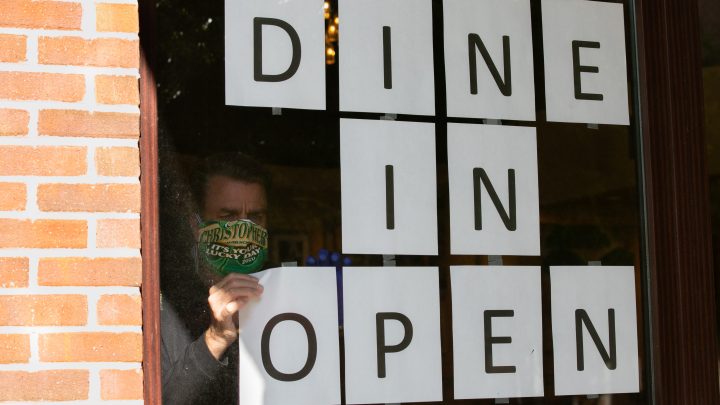 On a typical Saturday night before the pandemic, Le Colonial — a fancy Vietnamese restaurant in the Buckhead neighborhood of Atlanta — would be full. You’d see bartenders slinging cocktails with names like the Vietnamese mule and large groups sharing family-style dishes like roasted duck in a tamarind-ginger dipping sauce.

The restaurant closed in mid-March and reopened on May 4. It feels different now. The bar is closed. Servers are wearing masks and gloves. The tables are 6 feet apart, with potted palms placed strategically in between.

“We tried our best to fill in the void with the plants and being creative not to make the dining room look empty,” said Hassan Obaye, regional executive chef at Le Colonial.

Only one person is allowed in the bathroom at a time, and there’s a worker assigned to spray it down with disinfectant after every single use.

Also, the restaurant did away with laminated menus in favor of disposable paper ones and it is handing out throwaway chopsticks — the kind that come wrapped in red paper.

“Just to prevent, you know, any type of — it’s peace of mind, is really what it is,” said Jake Guyette, the restaurant’s general manager.

Guyette says at Le Colonial, people at different tables — total strangers — used to talk to each other. Now they stick to their groups. And he’s noticed, when they walk to their tables or the bathroom, “there’s a caution on their faces, as far as they don’t want to get too close, you know? I feel like everyone’s scanning each other’s health. How does this person look?”

A lot of people who do come back want normalcy. They want going to a restaurant to feel like it did before. But things are not the same for customers — or for the restaurant.

With the changes Le Colonial has made and the rules set by the state, the restaurant is only able to serve about half as many customers as usual.

“No matter how well we do under the constraints that are in place, you are still a far cry from what you’re able to do prepandemic,” said Rick Wahlstedt, who owns Le Colonial and six other restaurants.

Sales, including takeout, are down by 30 to 40%. But Le Colonial still has to pay rent, utilities and wages. It’s brought back about 75% of its workers.

Wahlstedt says his goal for the rest of the year isn’t to make money. It’s just to not lose money. To survive.