The view of an empty mall in Columbus, Ohio. Matthew Hatcher/Getty Images
COVID-19

The view of an empty mall in Columbus, Ohio. Matthew Hatcher/Getty Images

Retail and food services sales in April plummeted 16.4%, their largest decline since the government began tracking data. Monthly sales in March were $483.5 billion compared to $403.9 billion in April, according to the Commerce Department.

The dismal figures almost doubled March’s massive drop of 8.3% as stay-at-home orders began to take effect, businesses across the country shut down, and millions were laid off from their jobs and lost income.

“I think obviously [the report] is a little bit discouraging but I also think it’s not that surprising to see how much retail — apparel specifically — suffered,” said Alexis DeSalva, a senior research analyst with Mintel.

The clothing and clothing accessories category experienced the biggest drop at almost 79%. Nearly every type of retail operation declined, even grocery stores, which decreased 13.2% last month.

Camilla Yanushevsky, an equity research analyst at CFRA Research, thinks this figure reflects how people had initially panicked about the coronavirus and began stockpiling food and household items in March, but now don’t have as much to buy. “They already overbought everything in March, and the psychology of the consumer switches from stockpiling to penny pinching,” she said.

Alexis DeSalva said the decline may also reflect more grocery purchases at places such as Amazon, Target and Walmart instead. People may be buying all their necessities at a store like Walmart so they can avoid making multiple trips.

The only category to see gains was “nonstore retailers,” like online businesses, which jumped 8.4%.

While the clothing stores category had the biggest decline, the category could get a boost as companies advertise sales and consumers shift into a “treat yourself” mentality.

“I think some of these promos that rival Black Friday or Cyber Monday are going to cause a spur of demand for apparel,” Yanushevsky said.

Yanushevsky added that sporting goods equipment and apparel may also see a boost as the summer season begins and more people want to get out of the house. But businesses that sell bigger ticket items, like cars, will probably take longer to recover. 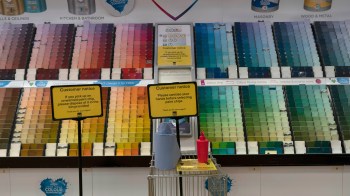