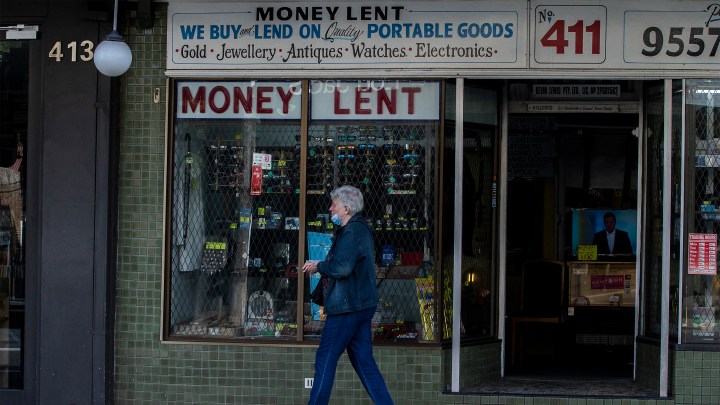 COPY
A woman wearing mask walks past a pawn shop on May 7. Jenny Evans/Getty Images
COVID-19

A woman wearing mask walks past a pawn shop on May 7. Jenny Evans/Getty Images
Listen Now

Outside an EZPawn franchise in South Austin, Texas, David Gomez grabs a TV out of his trunk and lugs it inside the store. The 24-year-old says he’s on medical leave from his job at the Tito’s Handmade Vodka distillery and needed some cash to help pay for his mom’s medication.

“Basically we needed a hundred dollars and I didn’t have the money, so I came and brought the TV,” Gomez said.

The other option for Gomez would have been a payday lender, but he sees the pawn shop as a better option.

“I would rather have something lost, where I can work for it harder and get it again, rather than going to a loan place and having debt collectors call me, call my job, call my family,” he said.

Gomez said his credit isn’t good enough to secure a bank loan, so he doesn’t try.

Jordan Birnholtz, COO of PawnGuru, a startup based in Ann Arbor, Michigan, said there are a lot of people in the U.S. just like Gomez.

“Over 30 million Americans are underbanked. They don’t have reliable access to the same financial institutions that the rest of the country does,” he said. “And for those people, pawnshops are an essential resource.”

Essential, yes. But a loan from a pawnshop can also be really expensive. They sometimes charge an annual interest rate in excess of 200%.

With tens of millions of people filing for unemployment since the outbreak of COVID-19, pawnshops have seen a modest uptick in business, becoming essential to some communities.

This is how pawning works (and we’ll take Gomez as our example):

That TV he brought in? EZPawn lent him a hundred bucks for it.

If Gomez can’t keep up with his high-interest payments to get the TV back, the shop will keep it and sell it. It’s called a collateralized loan.

James Crawford, owner of Heritage Jewelry & Loan in Sugarland, Texas, outside of Houston, said the public’s gut reaction is likely that owning a pawnshop during a global pandemic would be “the greatest thing in the world.” But, he said a lot of folks who might be pouring into pawnshops right now are being floated by those $1,200 checks from the Feds.

“We’re seeing people not have that much of an impending crunch on their cash,” Crawford said.

But he noted that the government money’s going to run out pretty fast.

It did for David Gomez at the EZPawn shop in South Austin. But he’s confident he’ll get his TV back.

“I’ve done this before, so I know I get all my stuff out. I didn’t sell nothing, I pawned it,” he said.

He’s just hoping he only has to take a two-week break from his job at the distillery so he doesn’t have to come back to the pawnshop for a while.

Editor’s note (May 18, 2020): A previous version of this story misstated the reason Gomez is currently not working at Tito’s. The distillery says it has not furloughed any workers.