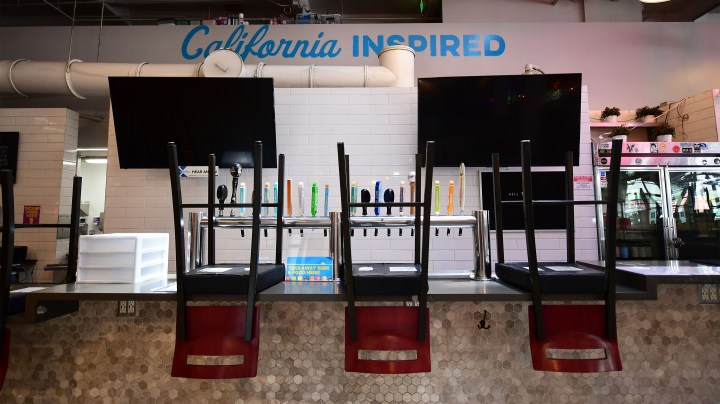 When the first round of the Paycheck Protection Program ended, we reported that different parts of the country saw very different success rates in getting loans approved. Now, we’re learning more about how the second round of funding is shaping up, and it’s pretty clear that the states that did worst in round one are seeing success in round two.

During the first round of the PPP, Alexandra Mason had a hard time getting a loan. She runs a marketing consultancy in Washington, D.C. One bank rejected her application. Another approved the request but never sent the money. But after round two kicked off last week, she applied again.

“Within three days, including a weekend, my approval came through and was funded,” Mason said.

As of May 1, Washington, D.C.; New York, New Jersey and California are getting greater shares of loan approvals, relative to their shares of the U.S. population.

“Too much of this money was going out to businesses that needed it less,” Kabateck said.

Customers in those states are also more likely to bank with larger institutions, according to Ernie Tedeschi, an economist with Evercore ISI.

In the first round of funding, that was a disadvantage, since community banks in rural states saw the most success. But the second is different.

“That trend has been reversed a little bit,” Tedeschi said.

Bigger banks had more advantages in the second round, like the option to upload applications in bulk. Tedeschi said banks in coastal states likely had time to process loans after the first round of funding ran dry.

“You know, sorta finalizing applications and getting them ready for the eventuality of more appropriations coming,” Tedeschi said.

The Small Business Administration says 53% of approved dollars in the second round came from banks with more than $50 billion in assets.