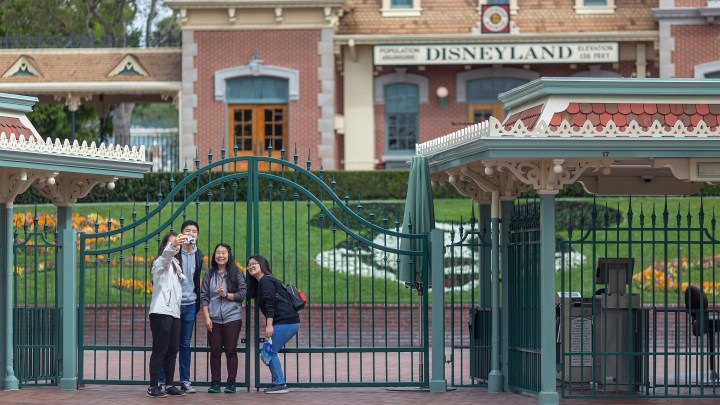 COPY
People stand outside the gates of Disneyland in March. David McNew/AFP via Getty Images
COVID-19

People stand outside the gates of Disneyland in March. David McNew/AFP via Getty Images
Listen Now

Entertainment giant Disney reports its first-quarter earnings tomorrow, and they are expected to be less than stellar. COVID-19 has shut down the company’s theme parks, its subsidiary ESPN has no live sports to broadcast and film production has ground to a halt. Many cities in the U.S. are reopening or considering doing so, but when it comes to companies that bank on large gatherings, analysts are forecasting that the impact of the pandemic will be long-lasting.

“Ugly” is the word analyst Tuna Amobi, with research firm CFRA, uses to describe Disney’s upcoming results. He said that right now, he’s looking at which companies can handle pain. But, he said, “the question is how much pain? I mean, I think that we have probably another two quarters or so of this.”

In other words, can companies withstand the reality that COVID-19 may not be going away anytime time soon and that many restrictions will persist?

And some analysts are warning clients about the possibility of a second wave of infection.

But Neil Macker at MorningStar says we still need to worry about this first wave. When forecasting for companies, he said, one has to consider several pressing factors. “Public opinion. The other one is public liability, and the other one is just their general regard for their patrons and wanting to make sure they are safe.”

He’s predicting theme parks and other businesses that depend on people being able to gather freely won’t even consider reopening until September. He said they’ll  keep taking a hit in 2021.

Beyond theme parks, live music analysts don’t expect to see concerts resuming this year. Tourism analysts aren’t optimistic. And Shane McMurray with Wedding Report, a company that collects data on the wedding industry, said the possibility of a second wave of infection is weighing on consumers’ minds. “Most people are postponing, but even then. With postponements, now people aren’t going to travel, people aren’t going to gather in large quantities. So you are probably going to see those guest counts come way down.”

He expects the pandemic to impact his industry for… years to come.

Cities may open up again, but he’s not sure that means people’s wallets will.

At least for some time.