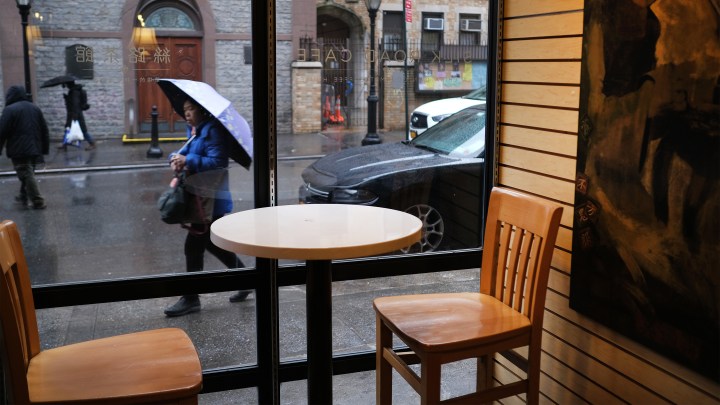 COPY
An empty coffee shop in New York. Many small businesses may rely on the second round of PPP loans. Spencer Platt/Getty Images
COVID-19

An empty coffee shop in New York. Many small businesses may rely on the second round of PPP loans. Spencer Platt/Getty Images
Listen Now

The Treasury Department announced Monday that during this quarter, it’s going to borrow $3 trillion to handle coronavirus expenses. The Small Business Administration released an update about the second round of the Paycheck Protection Program. As of Friday, $175 billion in loans had been approved.

That means there’s still a bunch of money to lend. For the banks that are processing those loans, that’s good to know.

Going into this past weekend, the Bank of Southern California was eager to hear from the SBA how much loan money had been approved so far.

“It helps a lot to know how much money is still available. You know, what resources do I need to work through the weekend,” said Nathan Rogge, the bank’s CEO.

Now that the SBA says PPP funding is still available, Rogge said the bank is going to start reaching out to customers and letting them know they can still take advantage of the program.

“I think a lot of people’s perception was, ‘Oh, it’s a complete mess. I missed the boat,’ ” Rogge said.

Bay State Savings Bank in Worcester, Massachusetts, is preparing for a surge in new applicants, according to President Peter Alden.

The bank’s employees are working long hours to submit applications during times of the day when there’s less competition.

“There’s been a lot of applications that have been inputted at night and other off hours, just to make sure that they get through,” Alden said.

Many new applicants are likely to be really small businesses with one or two employees.

“At least on our level, what we’re seeing is our largest customers have already participated,” said Chris Duncan, a senior loan officer at La Salle State Bank in Illinois.

Those smaller businesses are likely to take out smaller loans, so Duncan said it will likely take a week for the remaining $135 billion to dry up. Still, he sees no reason to slack off.

“We can’t look at that number and sleep on that number,” he said. “In our mind, in any point in time, that money could disappear.”

And even though money is still available, banks should be helping out the customers who have already applied, said Richard Baier, CEO of the Nebraska Bankers Association.

“The process now needs to shift going forward to how do we manage loan forgiveness, [and] how do we help make sure borrowers are in compliance?” Baier said. And, help customers manage the financial implications of their businesses reopening.