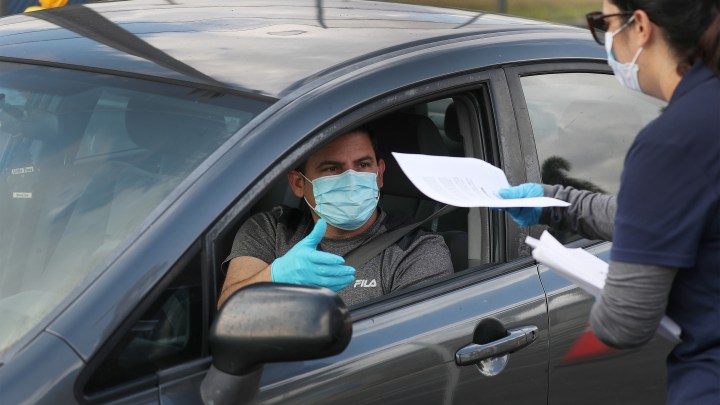 The 5.2 million new claims for state unemployment benefits released Thursday morning reflect a massive amount of job loss for American households in a really short period of time. Just four weeks ago, 22 million more people were working. Now, one in seven Americans who were employed before the pandemic have lost their jobs due to COVID-19.

“[On] February 5, I started tending bar and waiting tables at a little family restaurant about 11 miles south of where I’m at,” he said.

That’s northeastern Nebraska, where Windley and his wife operate a small farm and produce stand. Working at the restaurant was going to provide extra income — until it shut down in mid-March. Windley used to be a union ironworker, and he’s been on unemployment before.

“It was such a hassle,” he said. “I would rather take a beating than try and go through unemployment again, on a system that’s broken down and just not working.” He won’t be counted among the unemployed.

Immigrants without authorization to work aren’t eligible for unemployment benefits. Yannan Collins, 28, is originally from China and now lives in Texas; her application for a green-card is pending. She was working for an HR firm as an independent contractor, but the firm shut down.

“I don’t have income, and I can’t apply for unemployment,” she said.

Some people aren’t working or earning income, but they haven’t lost their jobs. Nate Edwards, a manager for a national rental car company in St. Louis, was furloughed in early April along with many of his co-workers. His wife is still working as a corporate attorney.

“We have enough saved up, [and] we can cover our expenses for the next couple months,” Edwards said. He won’t apply for unemployment unless his furlough turns into a permanent layoff.