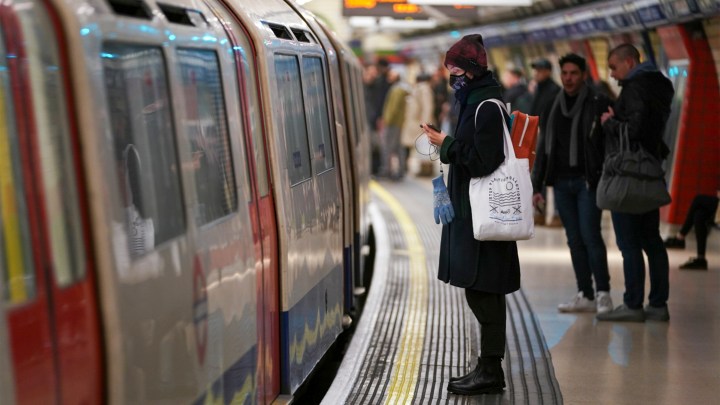 The past year has been a particularly anxious time for many British businesses. The uncertainties of Brexit have been a major worry, and for companies that export to the U.S., the threat of American tariffs has been another source of concern. But all that pales into insignificance alongside the coronavirus pandemic.

Marketplace revisited a couple of small businesses, featured earlier on the show, to find out how they’ve been coping with the latest crisis.

As a cheese monger based at London’s Borough Market, Dominic Coyte is classed as a key worker and so is free to ply his wares. But his staff of 15 just didn’t feel safe mingling with the public.

“I wanted us to carry on as much as we could,” Coyte said. “but the decision was taken to furlough all the staff. And that’s what the staff wanted. One hundred percent said: ‘We want to be furloughed.’ ”

Staff members have been temporarily laid off with the government paying 80% of their wages. Meanwhile, Coyte struggles on, manning a small stall in a Saturday market, selling some cheese online and generating a trickle of revenue, equal to only 10% of his usual retail income.

Brexit was bad enough for his cheese company, which imports much of its product from continental Europe. The 2016 vote to leave the European Union triggered a sharp fall in the British pound, making imports much more expensive and eating into his profit.

“It seems like we’ve had crisis after crisis in the last four or five years with Brexit and now the coronavirus,” Coyte said ruefully. “It seems like a lot of effort just to survive. “

Bolstered by a large, government-backed bank loan, he reckons his company can survive so long as business is back to normal by the fall.

More than 100 miles north of London, Clevedon Fasteners, a small engineering company, is also struggling. Before the virus struck, the company was making more than 30 million rivets a month, exporting to 38 countries and employing 40 workers. Today the factory is shuttered.

“We thought we could ride out the storm,” said Clevedon Managing Director Steve Hardeman. “But our subcontractors — the heat treaters, platers and toolmakers who finish our products — shut down, and we really couldn’t carry on.”

His 15 office staff are now working on full pay from home, dealing with administrative duties and processing the small number of orders they’re still getting. He’s furloughed his 25 factory workers and is topping up their  80% wage-support payment from the government.

“It’d be very unfair if people in manufacturing who can’t work from home  only got 80% of their income when all the office staff are getting 100%,” Hardeman explained.

But this can’t go on for long. Hardeman says that if the lockdown stretches beyond the summer, his company will be finished, and it won’t be the only one. U.K. Inc. — or U.K. PLC, as the Brits put it — is already in deep trouble.

“If this isn’t sorted and people aren’t back to work within three months, it won’t only be Clevedon. It will be U.K. PLC that goes bust,” Hardeman warned.

The damage is already unprecedented in modern times. According to one survey, some 20% of British companies have furloughed their entire staff or intend to do so. A further 17% are planning to furlough at least three-quarters of their workers. Nine million Brits — more than a quarter of the workforce — could be out of work.

The Cabinet will review the lockdown Thursday.