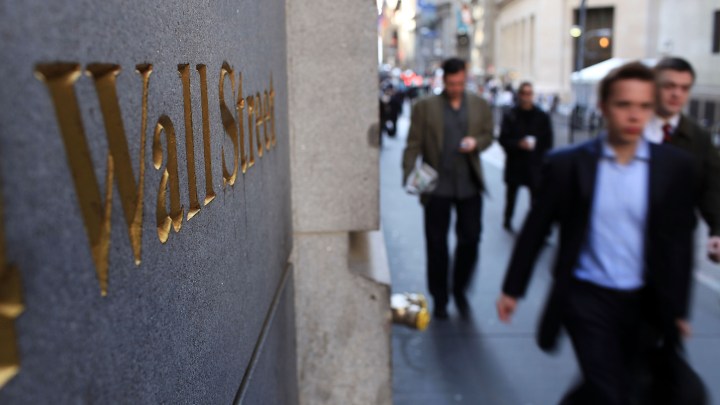 COPY
The impact of the coronavirus crisis won’t show up until the second quarter, and some banks will soften the blow with profits from administering federal stimulus programs. Spencer Platt/Getty Images
COVID-19

The impact of the coronavirus crisis won’t show up until the second quarter, and some banks will soften the blow with profits from administering federal stimulus programs. Spencer Platt/Getty Images
Listen Now

Banks are reporting their first-quarter earnings this week, and many of those reports will also contain educated guesses about how the COVID-19 economy will play out as the year wears on. They’ll likely lose money this year because of the pandemic, but most are also expected to keep paying dividends to shareholders.

Christopher Marinac, director of research for Janney Montgomery Scott, estimates that large- and medium-sized banks will distribute almost $54 billion in dividends in 2020. That’s about 9% more than last year. Marinac says banks could eliminate dividends as a PR move, to show they’re saving in a down economy.

The impact of the coronavirus crisis won’t show up until the second quarter, Marinac said. And some firms will soften the blow with profits from administering federal stimulus programs. For example, BlackRock Financial Management will help the Federal Reserve run a bond-buying program. But the Fed is sharply limiting BlackRock’s fees, and made the contract with BlackRock public. Bank watchdog groups like Better Markets like this approach.

“That stands in stark contrast to the Fed’s behavior during the ’08, ’09 financial crash, when the Fed disclosed almost nothing,” Better Markets CEO Dennis Kelleher said.

Banks will also profit from the federal Paycheck Protection Program — those small business loans meant to prevent layoffs. But Mayra Rodríguez Valladares, managing principal of MRV Associates, said community banks may be better at getting those loans out the door than the big guys.

“They don’t have huge staffs, they don’t have a lot of red tape,” she said. “Community banks — their specialty is indeed taking deposits and lending.”

For the Paycheck Protection Program, regulators temporarily loosened rules on how much money banks have to keep in reserve to cover bad loans, Rodríguez Valladares said. And banks are already lobbying to make those changes permanent.