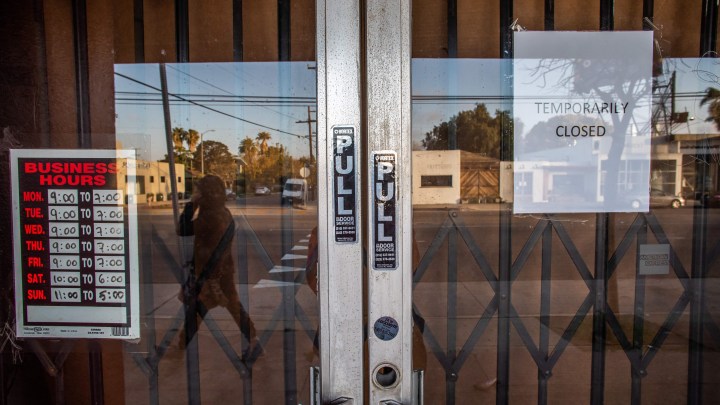 COPY
We’ll have to wait for the April report — in more than a month — to see the entire impact of the COVID-19 pandemic. Apu Gomes/AFP via Getty Images
COVID-19

We’ll have to wait for the April report — in more than a month — to see the entire impact of the COVID-19 pandemic. Apu Gomes/AFP via Getty Images
Listen Now

By the second week of March, there was already significant damage from COVID-19, according to the latest monthly surveys of employers and households from the Bureau of Labor Statistics. In other words, even before 10 million Americans filed for unemployment benefits as school and business closures spread, things got grim. And this is just a down payment on the pain to come.

Payrolls fell by 701,000, and the unemployment rate rose 0.9% to 4.4%. That’s the biggest one-month rise in unemployment since 1975. The economy has only ever lost more jobs in a month after World War II, and at the worst point of the Great Recession.

Again, both total job losses and the unemployment rate are surely already much higher than this report shows.

About two-thirds of the drop in jobs occurred in leisure and hospitality, mainly in food services and drinking places. Notable employment declines also occurred in health care and social assistance, professional and business services, retail trade and construction.

The Bureau of Labor Statistics cites numerous reasons its counting is likely off because of the pandemic. Fewer households and businesses responded to surveys than usual, survey-takers were working remotely and workers on furlough might be counted as “still employed.”

Just before the COVID-19 pandemic broke out in the U.S., the job market was cooking. Unemployment was at 3.5%, a 50-year low. And employers were adding nearly 250,000 jobs a month.

Economists are already making dire predictions for April’s report. With an unprecedented 10 million unemployment claims filed nationwide over the past two weeks, the unemployment rate could already be above 10% —the highest it got during the Great Recession.