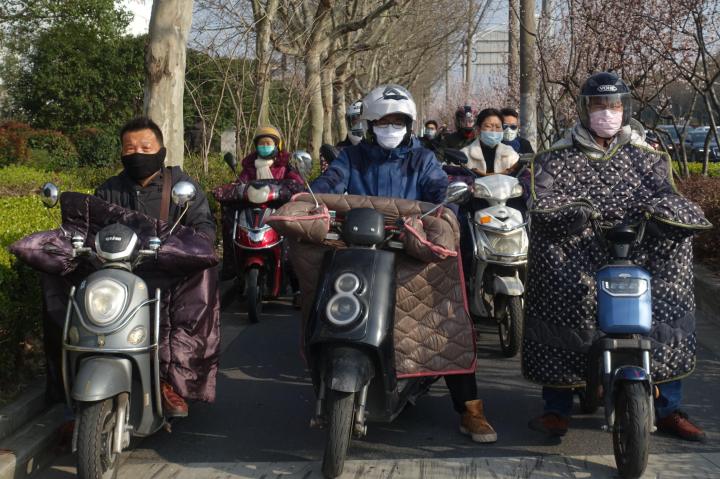 COPY
Workers in Shanghai are back on the roads as the Chinese economy tries to gear up again. Charles Zhang/Marketplace
COVID-19

Workers in Shanghai are back on the roads as the Chinese economy tries to gear up again. Charles Zhang/Marketplace
Listen Now

Huang Xiangyun chats with her colleagues at a clothing store in the suburbs of Shanghai. She is happy to be back at work.

In January, Huang was in central Anhui province visiting her family for the Lunar New Year when people across the country were forced to stay indoors to prevent the spread of the COVID-19 virus.

Huang was unable to leave her in-law’s home for 20 days.

“Some officials dug a big hole in our roads so no cars could enter the village. We could go grocery shopping, but we avoided that if we could,” Huang said. “My father-in-law organized volunteers to buy the stuff villagers needed.”

At the same time, the company she works for in Shanghai wasn’t able to open.

Huang was out of work for 40 days, which was tough because most of her salary comes from commissions.

Across China, a lot of workers get paid monthly and are just receiving their pay for February, when most businesses in the country were shut.

Last month, the unemployment rate in China’s urban areas soared to its highest, 6.2%, but those who still have a job are by law supposed to receive their regular salaries.

Huang’s colleague He Jie heard the company will pay them for February, but there was a catch.

“The plan was to give us our base salary, and then we’d have to work overtime to make up for the pay,” said He, who has been working with the clothing company for seven years.

She said she and the other staff protested and the idea was shelved.

She, too, was in Anhui province visiting her parents’ village for the holidays when the stay-at-home orders came down.

“I basically didn’t leave my parents’ home for a month. I played on my cellphone, watched [short videos on TikTok’s Chinese cousin] Douyin and read news about the coronavirus,” she said.

In another village in southern Anhui province, Zhu Ran was filled with anxiety about COVID-19.

“I couldn’t see the coronavirus, so I thought it would be everywhere if I stepped outside,” Zhu said. “I did not see a stranger for a few weeks.”

He was so preoccupied about contracting COVID-19 that he didn’t worry about whether his job at a local flight data company was secure, even though U.S. airlines and other carriers cut flights to and from China in February.

“At first I thought the economic impact would be short term. Besides, they’ll still need people to work after the epidemic ends,” he said.

Zhu thought the worst-case scenario would be his company putting him on unpaid leave for two month. He felt he could handle that because, like most Chinese citizens, he has large savings.

“My wife and I put aside some 60% of our salaries every month,” he said. “But then the worst thing happened.”

In late February, he got laid off, which was a big blow. But then, a week later, he found a job in public relations.

In Guangdong province, which is part of China’s manufacturing belt, Tai Hongling has been back at the shoe factory since late February.

She makes minimum wage but can more than double that with overtime and bonuses.

Trouble is, Tai said, not many orders are coming in from her factory’s main market, the United States.

“Yes, I still have work [for now] but there is no overtime,” Tai said. “My pay will be very low.”

On top of that, there are rumors of possible layoffs.

“The rumor is that factories in the area plan to lay off workers 50 years or older at the end of this month.”

Tai is not 50 yet, but she’s close. She said she needs to stay at her current factory job for two more years before she qualifies for a pension.

So far, she has not received a layoff notice.

Back in Shanghai, clothes sellers He and Huang went back to work on March 9, but ever since, they have been very careful about their spending.

“Before the [coronavirus,] I would order 30 yuan [$4] lunches, but now I spend only about half that amount,” He said.

He has also changed her shopping habits.

Two days after she and Huang spoke to Marketplace, they got paid.

“I’m happy! Excited! Thrilled! I was worried we wouldn’t even get that much since the company is in a difficult spot,” He said. “It’s better than I anticipated!”

Her colleague Huang is also happy.

“We didn’t work the month of February. To get the minimum wage is really good,” she said. “It’s so common for private companies to not pay employees in this situation.”

Now, Huang can cover most expenses for the month. That’s no small relief since her husband didn’t have much work these past two months and will have little or no pay.

Together they send money back to the village where their parents are taking care of their two children, ages 9 and 11.

Tough times lie ahead. Huang and He said there are far fewer customers coming into the clothing store.

“People are still following protection measures against the coronavirus and fewer people are out shopping,” He said.

At 27, she is optimistic that the company she works for, which is listed on the Shanghai stock exchange, will pull through the pandemic.

Her advice to Americans who are now grappling with the impact of the coronavirus is to follow the social distancing rules and stay positive.

“We’ve got both arms and legs that work. Even if we lose our jobs, once the pandemic passes, we can start again and find an even better job,” He said.