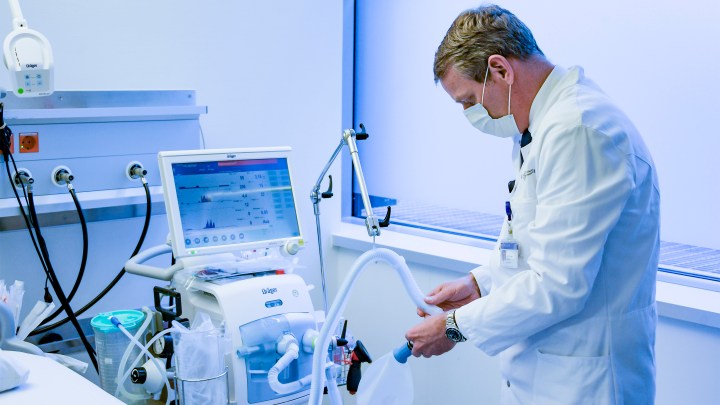 COPY
Ventilators are critical for many COVID-19 patients. A doctor demonstrates at a hospital in Germany on March 25. Axel Heimken/POOL/AFP via Getty Images
COVID-19

Ventilators are critical for many COVID-19 patients. A doctor demonstrates at a hospital in Germany on March 25. Axel Heimken/POOL/AFP via Getty Images
Listen Now

Access to a ventilator could be a matter of life or death for critically ill COVID-19 patients and Britain’s state-run National Health Service is dangerously low on the devices. At the time of writing, the NHS had just over 8,000 ventilators —  it needs at least 30,000 to treat the anticipated number of severe cases of the disease.

Britain’s relatively small-scale ventilator manufacturers cannot at present meet that demand and foreign suppliers are now focused totally on their own markets. To make up the shortfall, the British government has appealed to the non-medical engineering industry to retool and start manufacturing this vital equipment in large quantities.

“We want anybody who has the manufacturing capability to turn to the manufacture of ventilators,” said Matt Hancock, the nation’s health secretary, at a recent news conference.

More than 3,000 companies, making a wide variety of products, responded to that appeal.

Among the would-be ventilator makers: Dyson, best known for its vacuum cleaners and hairdryers; Rolls Royce; and JCB, which makes mechanical diggers. Prodrive, one of the world’s top racing and rally car makers, has also offered to help.

“We’ve never made medical equipment before, but we’ve made lots of equipment that is quite similar. We work on complex hydraulic systems  where the valves, the solenoids, the actuators, the electrical systems that go into that are quite similar to the components in a ventilator. We’ve just never built anything for a medical environment before,” he said.

But that lack of medical orientation is a  problem, according to one critic of the government’s scheme. Professor of management at the University of Edinburgh Business School Nick Oliver said these high-tech volunteers are lacking one skill that’s vital in ventilator making.

“It’s understanding the medical environment as distinct from the environment of the race track or the open road. These are very, very different environments,” Oliver said.

“I think the idea that manufacturers, even very skilled manufacturers, who are not well versed in the art of producing medical devices can suddenly turn on production of such devices is a little optimistic, to say the least.” He said.

Andrew Rayner of MEC Medical, which makes ventilator components, is also skeptical about the government turning to non-medical companies for these devices.

“I can’t see it being feasible,” he said. “They should be putting their efforts into existing manufacturers of ventilators, and trying to upscale their production.”

Dyson says it has designed an entirely new ventilator and has received an order from the NHS for 10,000 machines. The government claims that mass production of ventilators is only days away. Still, Rayner has his doubts.

“They’re not days away. They’re going to be weeks away. And the volume that our government requires, and the manufacturing that’s going to have to go into these … there’s no quick solution,” he said.

But a quick solution is required. The pandemic is expected to reach a peak in Britain within the next two weeks.

What kind of medical cost coverage has the CARES Act offered Americans?