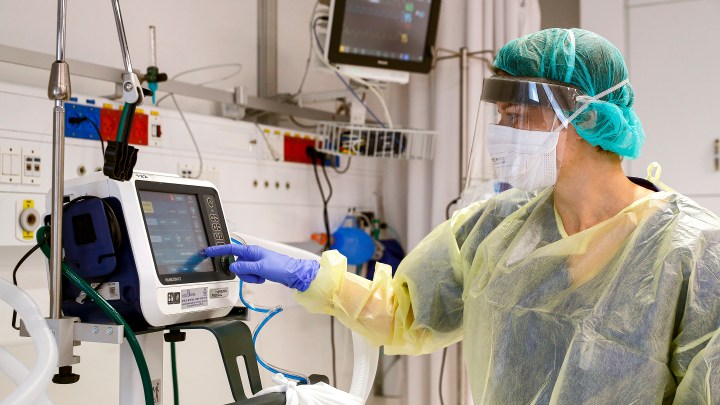 Shortages of important medical materials have inspired fear among many Americans.

“We can’t produce ventilators, we can’t produce face masks, hospital gowns in sufficient quantities, gloves. Most latex gloves are made in Malaysia,” said Michael Stumo, CEO of the Coalition for a Prosperous America.

Some countries, like China, haven’t been able to produce what they normally would for the United States. Other places, like the European Union, have limited their exports in an attempt to hoard supplies for themselves.

Having a diversified global supply chain can provide multiple levels of redundancy, like having backups for backups. Many companies, for example, have “China plus one” strategies, Blanchard said. This means they may source from China but maintain a separate supply route somewhere else as well.

The first step in determining whether the country’s medical supply chains can be improved is figuring out what those supply chains look like in the first place. Bipartisan legislation introduced last week (the Strengthening America’s Supply Chain and National Security Act) would start by having the Department of Defense determine how dependent it is on concentrated foreign-sourced medical supplies. Pharmaceutical companies would have to report to the Food and Drug Administration  how much active ingredients they get from suppliers in different countries.

“One needs to have an understanding of what that capacity looks like if, for instance, certain factory closures might happen due to the kind of situation we are facing now,” said Anand Nair, professor of operations and supply chain management at Michigan State University. “Then we can address the product shortage issue.”

Another part of the solution: better stockpiles.

“It turns out stores and supplies were dangerously low at a time when epidemiologists had been warning about the potential of a pandemic for a long time, so stockpiling seems a completely reasonable approach to take,” Blanchard said.

Blanchard also warned against trying to make everything at home or putting up barriers to global supply chains.

“One, that’s incredibly inefficient,” she said. “Two, if you have a pandemic or natural disaster that takes offline a whole bunch of workers in that country at the moment in time it’s hit by the disaster, it also gets hit by a production shock” and can’t protect itself by relying on sources abroad.

Raising protective barriers, which some countries have resorted to, is another impulse that Blanchard says is destined to backfire. Fearful that a country doesn’t have enough masks to provide to a local hospital, “you don’t want to see your firms exporting masks across the border. But if you back up and say, ‘If I put a new tax on masks or ban masks from going overseas, what else can go wrong?’ — there’s a lot that can happen.

“Your trading partners may say, ‘OK, I see what you are doing. I will end my export of gowns or ventilators.’ And then everyone has a piece of what they need, but not everything.” In that case, everyone loses.

“What can we as humanity do to make our supply chains of medical products more resilient?” Blanchard asked. “The answer is pretty simple, we can stop doing things like imposing import tariffs and export restrictions. That’s what’s making the system insecure. It’s the restrictions governments are imposing, not the supply chains themselves.”

How much money are supply chain disruptions costing companies?