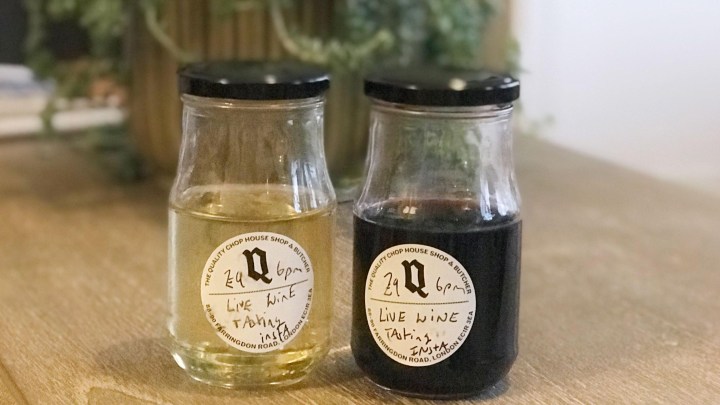 A constant stream of news about turmoil in financial markets and lockdowns across the world can get pretty heavy.

So we’re highlighting how businesses across the world are finding innovative ways to stay open and serve customers as long as they can.

The wine bar is now closed to help prevent further spread of COVID-19. But Gluck’s retail shop is still open: Customers can buy bottles of wine, meats, cheeses and other provisions the company sells. To keep spirits high among staff and customers, Gluck decided to start conducting virtual wine tasting sessions on Instagram in the evenings. The way it works: Those who want to participate can come to the shop, buy red or white tasting sets (for two people) for about $10, and then watch Gluck on Instagram Live at 6 p.m.

He says not only does it help distract people from what’s going on, but keeps the business up and running too.

The following is an edited transcript of Gluck’s conversation with Marketplace’s Victoria Craig.

Gus Gluck: We had a lot of customers come in, they were really worried about us as people and how we’re going to carry on. They were also really just upset that they couldn’t go to a bar and have someone just open bottles of wine and tell them about it. So a couple of people did ask like,”Is there any way you could do tastings at home in any capacity?” And I was just like, “Let me have a think.” And because we are a shop, we’ve got all these jars of things. We make jam, like once a year, and we had loads of jam jars left. So I was like, “OK, well, maybe I can just do tastings and see if people seem like they want to do it.” So that’s how it started. And then last night, 400 people joined to actually watch it, but it was about 55 people who actually bought tasters.

Victoria Craig: And you got lots of interaction, too. I was on last night and it seemed like people really welcome the respite from this relentless news cycle.

Gus Gluck: Yeah, I mean, I’m someone who always tries to take things with a pinch of salt. Like the bar has never been mega serious, even though we sell serious things. And so, just thought […] give someone something to do at six o’clock, and also, it’s a good time because people can clock off work from home, they should clock off at the exact same time as they normally do.

Victoria Craig: The wine bar is closed, but you’re still selling wine and other products from the butcher shop next door. How is business going right now with things kind of half on lockdown?

Gus Gluck: It’s busier than ever. It’s like being at Christmas. It’s like four days before Christmas. But the situation is not Christmas. So, because I’m part of a larger group of restaurants, they all got shot. So I’ve got all their alcohol. Because we can’t spend anything, because we’re just trying to save money to pay staff, and we’ve got a lot of random stuff to sell off. And then, food-wise, we’re just getting loads of orders.

Victoria Craig: There’s talk London could go into lockdown at the end of this week. Does that mean you’ll have to close or can you stay open since you’re selling food and other provisions?

Gus Gluck: We don’t know. If it looks like Italy, then it will potentially look like a one in, one out and we’ll have to keep very stringent. We might make a business choice to go on with full closure. The owners are very concerned that, because of how uncertain the environment is, they don’t know if they can pay us after the next two weeks, because there might be literally no money left. So they’re also in the mindset of saying, “Maybe we should just close, even though we are very happy to try and make it work.” We’re not looking toward it as a paycheck. We hope we can try and get some money out of it, because the industry has such high unemployment at the moment. But we also have some amazing customers who we want to make sure we can service.

Victoria Craig: And it’s exactly that kind of philosophy that, despite these circumstances, you’re not going to let that stop you from hosting wine tastings, regardless of whether people can come in, you’re gonna do it anyway, aren’t you?

Gus Gluck: Yeah, I’ll continue at home for as long as possible. I mean, I’ve already been in talks with a few other businesses, and see if I can match up with them so more people can get involved. We’re all in this together.