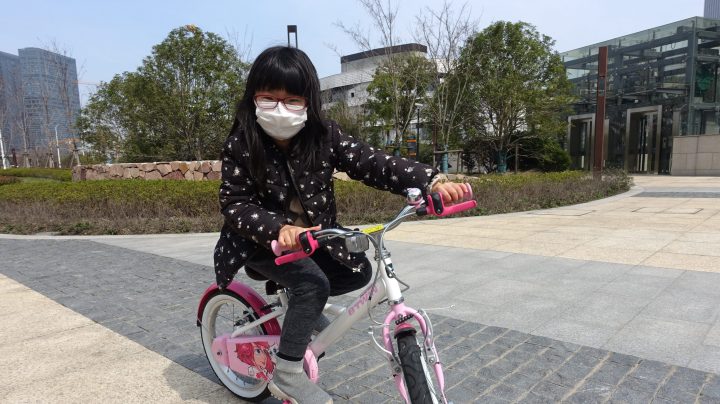 COPY
Ada Lu learned to ride a bicycle outside her apartment complex during the COVID-19 virus outbreak in Shanghai. Charles Zhang/Marketplace
Parenting in a Pandemic

Ada Lu learned to ride a bicycle outside her apartment complex during the COVID-19 virus outbreak in Shanghai. Charles Zhang/Marketplace
Listen Now

Eight-year-old Ada Lu stares at a smart tablet propped up on the coffee table in her living room in Shanghai.

This is her makeshift classroom for the foreseeable future. Every class consists of 20 minute videos and then 20 minutes of discussion in a group chat online, which all require the assistance of her mother, Yang Weina.

“We’re all complaining [in the parent group chat that] we are like the servants [to our young children],” Yang told Marketplace during a lunch break.

Schools and universities have been shut in China to prevent the spread of the COVID-19 virus since early February. Now, 270 million students have resumed classes in one form or another.

Most students are only allowed to attend classes online, which makes life difficult for working parents like Yang and her husband.

Luckily, Yang’s employer is advocating a work-from-home policy during the virus outbreak, but it has not been easy to juggle work and her daughter’s schooling.

“I try to minimize [Ada’s] screen time and have her rest her eyes for as long as she can,” Yang said.

During online group discussion time, Yang will read out the questions for her daughter and type answers on her behalf, which means she is effectively attending class herself.

Yang set up her workstation on the coffee table next to her daughter.

“Here is my laptop, here is her tablet, like we just work side by side. I multitask,” Yang said.

Home schooling requires official permission in China, but in normal times it is rarely given. One factor is because Communist propaganda is an important component of the curriculum and parents may not implement it effectively.

Therefore, attending school online during the COVID-19 virus outbreak is a big adjustment for many families, including Carol Jia, a mother of two.

She and her husband take turns working from home while their six-year-old daughter, Pearl, attends online classes.

It was difficult at first because Jia also has a 5-year-old boy who is not yet in school.

“He is just impossible. [He is] running around screaming and shouting all the time. We live in a flat, not a house. So, we can’t just block him on the second floor or in the garden. He will [run] around his sister,” Jia said.

“I decided to send him away [to my parents’ place].”

Both she and Yang are among the lucky ones.

In central Henan province, the Li family has three children sharing one screen and there is no money to buy more, according to the father Li Handang.

“The three share one smart phone. My eldest was using it to attend online class one day but by the time she was finished, the middle child had missed a homework assignment from her teacher,” he told a local media outlet by phone.

Distraught, his second daughter, who is a freshman, attempted suicide.

The news was censored but not before it circulated widely among parents, including Yang in Shanghai.

“We can really relate to the girl. She is actually from my home province [of Henan],” she said.

Yang considers herself part of a lucky generation who could escape the poor countryside by doing well in school.

“Me and my husband are from the rural area. We got into graduate school and then got an OK job in Shanghai,” she said.

Nowadays, to achieve what Yang and her husband did is much harder because the gap in standards between schools in big cities and the rest of the country is widening.

For example, the online courses Yang’s daughter is taking are organized by Shanghai’s government. The elite teachers are hand-picked by the Shanghai Municipal Education Commission to conduct video classes for all grade two students online.

Those in the same grade further west in Huangshi city, near Wuhan, the epicenter of the virus outbreak, have no compulsory online classes.

Even so, seven-year-old Ye Zixuan has been taking web courses in math and Chinese that her teachers recommended.

“The [web courses] are not as good as what her teachers do in school,” said Ye’s father, Ye Kun.

Both he and his wife work at the local hospital and take turns to stay home.

“Before the virus outbreak, our parents took care of our children when they’re not at school. Now because of the travel restrictions, they cannot come here,” Ye said.

“Our neighbors also can’t help us because we are not allowed to visit other households in Hubei province now.”

Many families rely on hired help in cities like Shanghai, such as Yang’s.

However, she is not sure it is safe health-wise to call back the part-time nanny and cleaner yet.

For now, she is also the one in charge of the housework in addition to her daughter’s schooling.

“I’ve been a feminist and [quarreled] for equal rights with my husband!” Yang said.

She was laughing while making the statement, but she admits that she is struggling.

It has been just as tough on her daughter Ada, who hasn’t played with her classmates in more than a month.

“Do you have to work right now? Could we play for a bit?” Ada asked me.

Then she invited me over for lunch, but non-residents are not allowed in her apartment complex as part of a virus prevention measure.

“After the epidemic, then we can have a social gathering,” Yang told her disappointed daughter.