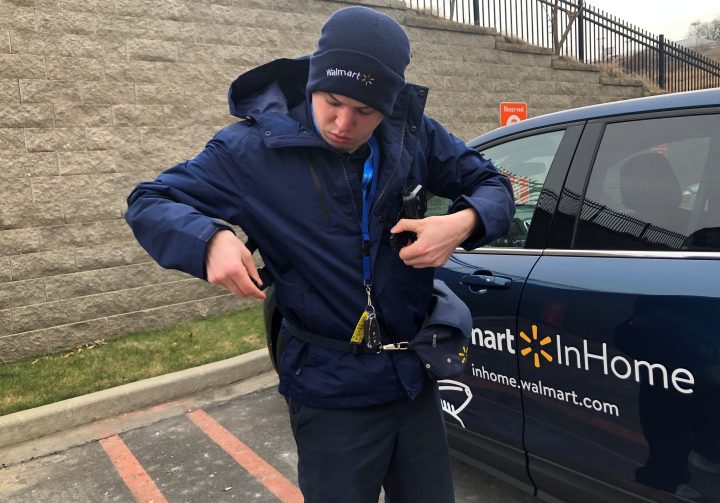 Walmart launched a pilot of its “InHome” grocery delivery service last October, which promises to deliver food directly into customers’ homes, whether or not they’re there. Walmart is trying to stay one step ahead of competitors like Amazon, which now owns Whole Foods and also provides in-home deliveries. While Walmart has been tight-lipped about the program’s success, experts expect more immediate grocery services will likely become popular across the industry.

Outside a home in suburban Pittsburgh last month, Walmart associate Nick Burmaster unloaded groceries from one of the company’s branded cars. Dressed in the company’s blue delivery uniform, Burmaster put surgical booties over his tennis shoes and turned on a small camera strapped to his chest, which began a livestream to the customer.

“I lean down to show that I put booties on, and then you always face the door, that way it shows me unlocking it,” Burmaster said.

Through Walmart’s delivery app, Burmaster is able to unlock the customer’s door after a series of security checks. For each InHome customer, Walmart installs a smart lock either on their door or garage (the cost is $50). This allows electronic access for Walmart’s delivery associates.

Burmaster goes inside, unloads the cold groceries into the fridge and pantry items onto the customer’s counter.

Walmart’s pilot for in-home delivery began three months ago in Pittsburgh, Kansas City and Vero Beach, Florida. While the company won’t share details about how many customers it has or how many deliveries have been done, it says it is happy with the results.

“I think a lot of the things we’re seeing now are really good teasers for what’s to come,” said Whitney Pegden, Walmart’s vice president and general manager of InHome. “But also could shift pretty dramatically as we scale.”

Walmart will expand the InHome program, according to Pegdem, but the company won’t share details about when or where that will be.

Natalie Gott of Moon Township, Pennsylvania, has been an InHome customer since late last year. She’s a mom of two who recently started working again, and she said she’s found it hard to find time to grocery shop. At first, she was hesitant to try a delivery service. Now she uses it once a week.

Groceries cost the same as in-store and an InHome membership is close to $20 per month, with the first month free. Gott said the cost of the service is worth the convenience.

“It has cut down a lot on the impulse buying,” Gott said. “If I’m shopping in the store like normal I would see something that’s on sale, or I’m hungry and something sounds good, so I don’t do that as much because I’m just shopping on my phone and following my list.”

Walmart isn’t the only company that delivers groceries inside the home. Amazon launched Amazon Key in 2017, which also relies on a smart lock to bring packages, including groceries, inside. It’s currently available in 50 cities.

“You really need to gain the consumer’s trust,” Guskey said. “And it is a hurdle for retailers to get over.”

Consumers ultimately want convenience, Guskey said. She said a decade or two ago, people hesitated to shop online because they didn’t want to put their credit card on the web.