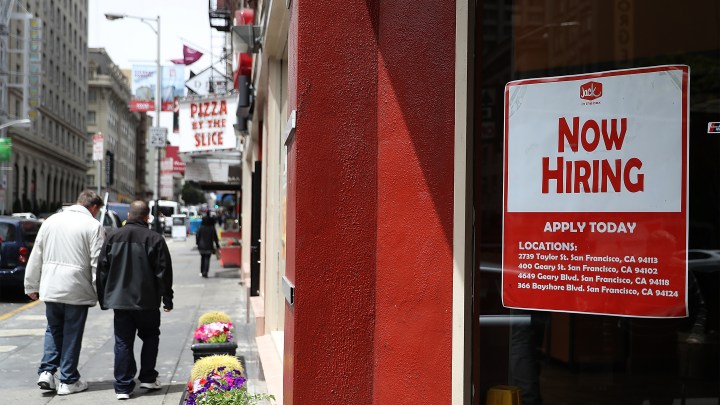 COPY
Two weeks might not be enough notice for some employers to find a replacement in this tight job market. Justin Sullivan/Getty Images
Workplace Culture

Two weeks might not be enough notice for some employers to find a replacement in this tight job market. Justin Sullivan/Getty Images
Listen Now

Thanks to a tight labor market, the rate of job turnover in the United States has been trending up in recent years, and the beginning of the year often sees a spike in people changing jobs. But while the nature of work has evolved dramatically over recent decades, the conventional wisdom about how workers should leave a job has remained pretty much unchanged: Give two weeks’ notice.

That’s what Jay Buchalter did when he decided to leave his job as a sales representative for a footwear supply company in Los Angeles a couple years ago.

“I kind of come from the old school, and it seems to be the industry standard,” he said, figuring it would give him time to wrap things up and perhaps help train a replacement. But he said his company didn’t even post his job, leaving him feeling inconsequential.

“I think two weeks’ notice does feel a little arbitrary,” he said. “I really don’t know where that came from.”

Neither, it seems, does anybody else, including Alex Colvin, the dean of Cornell’s Industrial and Labor Relations school.

“It’s a good example of something that doesn’t have very clear origins,” he said. Unlike, say, the 40-hour workweek, two weeks’ notice can’t be traced to an obvious law or government policy.

It’s a norm that likely goes back to the 1940s and ’50s when a lot of big companies were formalizing their human resource practices and the “two-week notice” started showing up more in employee handbooks.

“You’d go to work for a company for your whole career, they would provide you a certain set of benefits, and the idea was that you, as the employee, owed some loyalty to the company,” Colvin said. “It was a social contract at work.”

That social contract today seems to have very different terms. Chicago IT professional Dana Kleifield was taking some time off from work a couple years ago when she got an attractive job offer.

“I wanted to give adequate notice. I also didn’t want to put off my start date too long,” she said. “So I decided to give notice while I was still on vacation so that once I came back, it would be a full two weeks for me to transition my responsibilities.”

Her boss didn’t take it so well. She said her employer was angry she gave notice while on vacation, and she wasn’t allowed to return to the office to say goodbye or even clean out her desk.

“In retrospect, I wouldn’t have given two weeks’ notice at all if I knew that I was going to be essentially punished for it,” Kleifield said.

Bypassing the two-week notice is becoming more common, according to Traci Fiatte, the CEO of Non-Technical Staffing at Randstad USA. She said the attitude shift is sharpest among younger workers who came of age during the job cuts of the Great Recession.

“Their experience, either personally or through watching others, was that they didn’t get a two-week notice, so why should they give one?” she said.

Even Fiatte’s own teenage daughter planned to just skip out on her summer job as a waitress at a retirement home, saying “That’s what everyone else does,” until Fiatte convinced her otherwise.

For employers, dealing with the aftermath of sudden exits can be tough. Dane Binder oversees health care professionals at a crisis center in Tucson, Arizona, that serves people with substance abuse and mental health issues.

“So we’re really trying to navigate a clientele that’s very high needs, and without that notice, these folks who are very much in need of our services really do suffer,” he said.

Replacing those departed employees is getting harder, too. Thanks to factors like the tight labor market and the increasingly specialized nature of work, federal data shows it’s taking longer to fill jobs than at any time in the last 15 years.

“It does take at least a month to onboard somebody, so I think in an ideal world, I would really like at least six-weeks notice because two weeks is nice, but it’s totally inadequate,” Binder said.

But given the current climate, he said he’ll take what he can get.