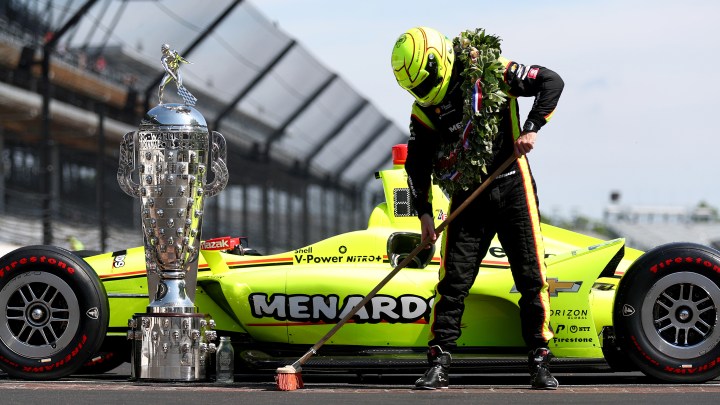 COPY
Simon Pagenaud of France, driver of the #22 Team Penske Chevrolet, sweeps the bricks during the winner's portrait session after the 103rd Indianapolis 500 in 2019 in Indianapolis, Indiana. Clive Rose/Getty Images

Simon Pagenaud of France, driver of the #22 Team Penske Chevrolet, sweeps the bricks during the winner's portrait session after the 103rd Indianapolis 500 in 2019 in Indianapolis, Indiana. Clive Rose/Getty Images
Listen Now

Businessman Roger Penske, who made his fortune in trucking, recently bought the IndyCar series, which consists of 17 races at different tracks around the U.S and Canada. He also snapped up the Indianapolis Motor Speedway, home to the Indy 500.

IndyCar has a close-knit fan base. Ryan Tierney was born and raised in Indianapolis and went to his first Indy 500 when he was a little kid.

“When you’re 7 years old, and you see and feel and hear the cars going by at 220 miles per hour at the Indianapolis Motor Speedway, that kind of visceral sporting experiences, that sticks with you forever,” he said.

Tierney is in his 40s now and still goes to the Indy 500 every year. There, he watches drivers crammed into single-seat, open-cockpit, open-wheel cars that rev past 7,000 rpm.

When Tierney talks about the sport, he uses “we” and “us.” He said fans are optimistic about Roger Penske’s new role.

“We understand that this is kind of a legacy project for him and for someone as successful as he is to take this on as that kind of a project is kind of exciting for us,” Tierney said. Penske is very into motor sports. His racing team is the most successful in IndyCar history.

The TV numbers are relatively low, too, especially compared to a regular season NFL football game.

“You look at the ratings. I mean, it’s not like we’re seeing huge increases. They’re inching along the last few years,” said Andy Baker, director of the motor sports program at Indiana University-Purdue University Indianapolis.

Shrinking TV audiences mean less money from sponsors. Baker said Penske Corp. may stabilize IndyCar, but it’s not going to be easy to revive it.

“I don’t see a lot of growth. I see a very saturated market. A lot of younger people aren’t driving cars, and they’re not changing their oil,” Baker said.

He said that could be a reason they just don’t get the sport. That, or they’re not interested.

But Penske Corp. does have one key asset: the Indianapolis 500 and its iconic racetrack, “The Brickyard.” Penske President Bud Denker said the group plans to update the track. Under previous ownership, he said, the speedway was getting a little long in the tooth.

The Penske Corp. also intends to ramp up marketing of IndyCar races to attract new fans. But Denker said revenue has to come first.

The amount Penske paid for the IndyCar series and the Indianapolis Motor Speedway was not disclosed.