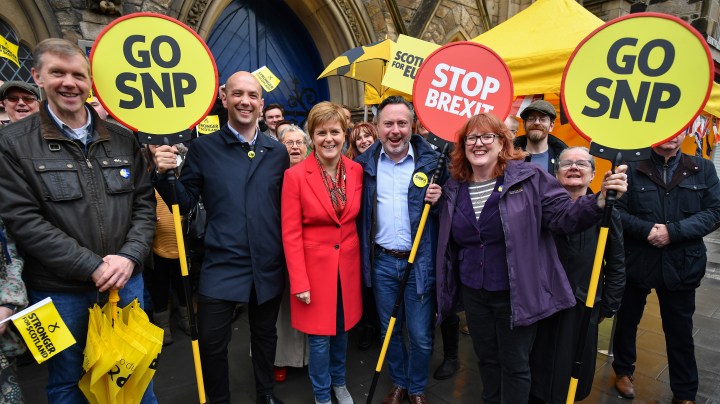 The United Kingdom will formally break free from the European Union on Friday, Jan. 31. But could this lead to the break-up of the union that is the U.K.? Scotland — one of the four countries that make up the U.K. — is very unhappy about Brexit. Scotland’s First Minister Nicola Sturgeon says her country is being “dragged out of the EU against its will” and that this will strengthen the case for independence from the U.K.

Sturgeon’s ruling, separatist party, the Scottish National Party, made big gains in the recent general election and that, she said, reinforced her call for another independence referendum.

“Scotland sent a very clear message in the general election. We don’t want to leave the European Union. And we want Scotland’s future to be in Scotland’s hands,” Sturgeon said.

Underlining her remarks, some 80,000 Scots joined a pro-independence rally in Glasgow earlier this month organized by a group called All Under One Banner. The group’s Andrew Wilson said that Brexit was just the latest reason for Scotland to leave the U.K. Even without the turmoil that Brexit will bring, he told Marketplace, his country would be better off, economically, standing on its own two feet.

“Scotland outperforms the U.K. average on exports, balance of trade, GDP per person, demonstrating that we will prosper in an independent Scotland.” Wilson said.

But supporters of the union claim that they have all the best economic arguments on their side. Pamela Nash of the pro-U.K. group Scotland in Union says that Scotland is much safer as part of the U.K. economy — of which it forms just 8%. Independence, she says, would be a disaster.

“In fact there was one study that showed that Scottish independence would be eight times as costly to Scotland’s economy than the worst-case Brexit,” Nash pointed out.

Scotland exports three times more to the rest of the U.K. than it does to the EU and Nash insists that it doesn’t make any sense to separate from the U.K. and then rejoin the bloc, “putting a border or any sort of barrier against our greatest trading partner.”

David Sands, who runs a chain of convenience stores in Scotland, says one of those barriers would be the new currency, the euro, which Scotland would eventually have to adopt.

“If the vast majority of your exports are with the rest of the U.K., having a separate currency makes things more difficult and certainly more expensive,” Sands said.

To Wilson, the Scottish nationalist and organizer of the All Under One Banner rally, these objections wrongly overlook Scotland’s illustrious past.

“We have centuries of demonstrating that we are able to trade and innovate and build businesses. I have no doubt we have the ability to prosper as an independent nation,” Wilson said .

Approximately half of Scots, according to the opinion polls, agree with him. If Brexit turns out badly, the level of support for independence could rise.