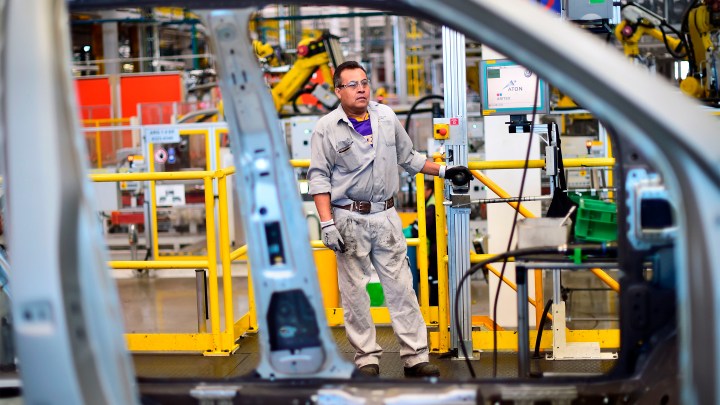 COPY
Employees work on the assembly line of the Tiguan model, at the Volkswagen car plant in Puebla, Mexico, in 2018. Pedro Pardo/AFP via Getty Images

Employees work on the assembly line of the Tiguan model, at the Volkswagen car plant in Puebla, Mexico, in 2018. Pedro Pardo/AFP via Getty Images
Listen Now

Mexico’s GDP was flat in the fourth quarter and contracted 0.1% for the full year of 2019, according to the National Statistics Institute. It was the worst performance for the Mexican economy since the financial crisis and recession of 2009.

While a lot of developed and developing economies hit speed bumps in 2019, Mexico hit a roadblock. Council on Foreign Relations Latin America analyst Shannon O’Neil said that’s partly because of the economic slowdown in the U.S.

“Mexico has definitely been affected by the softness in U.S. manufacturing,” she said, “and particularly in the automobile industry, in aerospace.”

That’s because parts and finished goods go back and forth across the border again and again before being shipped to their final destination.

“Mexico appears to have been the hardest-hit economy, on a macro level, by the U.S.-China trade war,” said de Bolle. “A lot of the supply chains between the U.S. and China run through Mexico.”

Construction and consumption have also been weak. Economist Ray Perryman at the Perryman Group in Waco, Texas, chalks that up to uncertainty among Mexican business owners and international investors, spooked by Mexico’s new president canceling big infrastructure projects.

And, the U.S.-Mexico border has been volatile.

“In 2019, there was discussion about diverting the resources that are used to clear cargo back and forth in order to deal with the refugee situation,” said Perryman. “There has been some slowdown in the retail traffic both sides of the border.”

“It’s a slow-growing economy and one of the reasons is the drag posed by the security, narcotrafficking and corruption issues.”