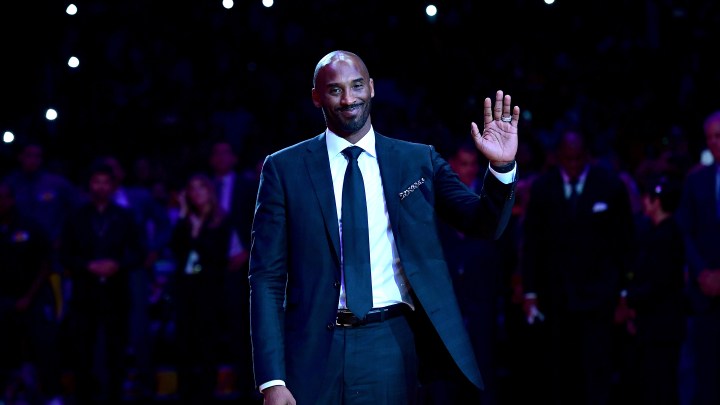 COPY
Kobe Bryant smiles at halftime as both his #8 and #24 Los Angeles Lakers jerseys are retired at Staples Center on Dec. 18, 2017, in Los Angeles. Harry How/Getty Images

Kobe Bryant smiles at halftime as both his #8 and #24 Los Angeles Lakers jerseys are retired at Staples Center on Dec. 18, 2017, in Los Angeles. Harry How/Getty Images
Listen Now

Athletes, fans and celebrities alike are in mourning following the death of professional basketball MVP Kobe Bryant. Bryant, his 13-year-old daughter and seven others were killed in a helicopter crash Sunday, January 26.

Bryant is remembered for his 20-year career with the Los Angeles Lakers, his rich success as an athlete, his character and his role as a businessman. A role that was “just beginning,” said Kenneth Shropshire, Adidas distinguished professor of global sport at Arizona State University.

Shropshire sat down with “Marketplace Morning Report’s” guest host Andy Uhler to discuss Bryant’s post-Laker career as an investor and venture capitalist. Below is an edited transcript of their conversation.

Andy Uhler: Kobe was obviously hugely successful on the court. He had a 20-year career, all in Los Angeles. Describe the business legacy that Kobe Bryant has left.

Kenneth Shropshire: I think it was just beginning. We’re not certain what direction he was going to fully take. He was really diverse in this first few moments of retirement. He was involved with a venture capital fund, a $2 billion fund. He funded companies like Alibaba, Tile (the device to find things), Cholula Hot Sauce. He was clearly deeply engaged with women in sport and in this last journey he was taking was girls basketball related and he’d recently made big statements about the WNBA and what U.S. women in that league could have.

Uhler: I wanted to get to dedication to women’s sports with you — you sort of hit on that — but this idea of Kobe being, you know, on the sidelines watching tons of WNBA games but also being very outspoken. I mean, Rebecca Lobo, ESPN analyst, said she didn’t think there was any bigger champion of women’s athletics or women’s, certainly, professional basketball, than Kobe was. This was a really big deal to him, and he was training his daughters to be professional athletes, right?

Shropshire: I think he was ready to find a way to see if his daughters could be that NBA daughter. He talked about, just in the past couple weeks, about women having the ability to play in the NBA. That that possibility exists. And he saw women today who could play. He was looking into the future.

Uhler: Now his legacy isn’t without some difficult periods. There was the sexual assault charge in 2003. The charges were later dismissed. But did this have any bearing on his brand? Did it sully it a bit?

Shropshire: Frankly, I don’t think there’s any question about it. I think the one criticism that we, unfortunately, hear in these times when we look at the negative side of somebody’s life is maybe how he did handle it. And maybe there was not as much energy as people would want to see of him addressing those types of sexual assault issues and leaving a greater message to men in this space going forward. But maybe what you did by living a much, you could say, better life from that moment forward was a message in itself.

Uhler: It was interesting to read Bill Plaschke column yesterday [in the Los Angeles Times] talking about how Kobe was Los Angeles, and I think a lot of people felt like that, right?

Shropshire: I think so. I had not really thought about that. Again, not living in LA now. I mean, I’m a guy that grew up with Jerry West and Elgin Baylor, kind of the older Lakers. And I had not really understood fully how much Kobe had become the face of Laker basketball. This sad moment solidified and clarified, really, who he is to Los Angeles.