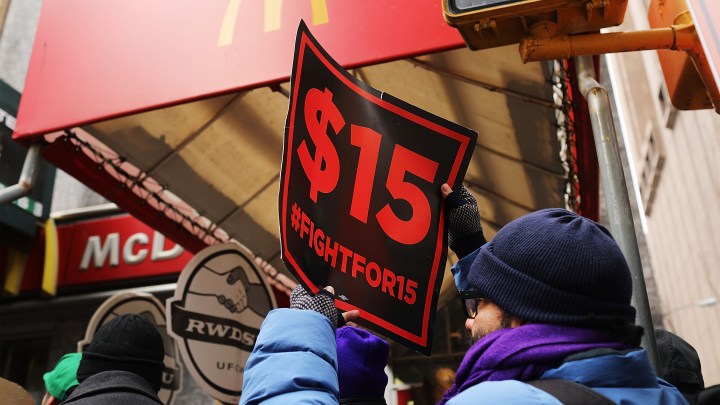 COPY
Even though unemployment is at a 50 year low, wages have room to grow. Above, a Fight for 15 protest in New York. Spencer Platt/Getty Images

Even though unemployment is at a 50 year low, wages have room to grow. Above, a Fight for 15 protest in New York. Spencer Platt/Getty Images
Listen Now

The December jobs report, which is released today, shows how many more jobs were added to the economy. Just as important as the number of jobs is how much they’re paying.

Wages are supposed to go up when unemployment is low — and it hasn’t been this low for 50 years. But wages still have room to grow.

So employers may not feel much pressure to raise wages to keep the workers they already have — like Idaho grocery clerk Mark Pemble, who said he makes $15 an hour.

“In the last three years, my pay has not gone up at all. You know, honestly, cost of living is not easy to handle,” Pemble said.

A recent survey by Morning Consult finds Americans’ confidence about their personal finances hasn’t improved much in the past year.