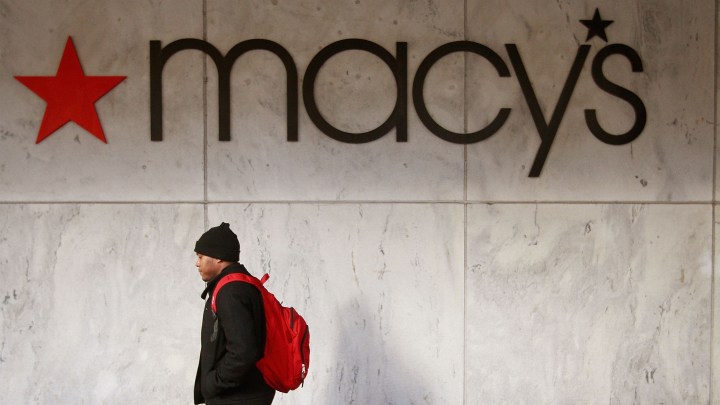 Where traditional retail stands heading into 2020

COPY
Macy's is set to close some stores after a tough year. Above, a Macy's store in Chicago. Scott Olson/Getty Images

Where traditional retail stands heading into 2020

Macy's is set to close some stores after a tough year. Above, a Macy's store in Chicago. Scott Olson/Getty Images
Listen Now

Macy’s announced it is closing some locations, after store sales fell more than 0.5% this holiday season, on top of a tough year on the stock market. Pier One Imports announced store closures earlier this week.

Holiday sales were not amazing, but not bad either.

“Nothing to ring the bells from the housetops with, but not terrible at all —they were up 3.4%, give or take,” said Paula Rosenblum, a managing partner at RSR Research. That’s not as high as some predictions, but … that’s sales.

Charles O’Shea, a retail analyst at Moody’s, said it’s one thing to sell a product, but another to make money doing it. There were a lot of discounts and free shipping this season, and we haven’t yet heard yet how painful those were for retailers.

January is returns season and there’s a lot yet to happen, including clearance sales. As for Macy’s and Pier One closing stores, that’s a bigger picture trend.

“The U.S. has too many physical retail stores,” said Sucharita Kodali, an analyst with Forrester.

“A lot of our stores, candidly, are a bit tired and look exactly how they looked in, like, 1985.”

Older brands that haven’t kept up with e-commerce are closing stores. It’s a trend that one holiday season’s numbers aren’t going to change.