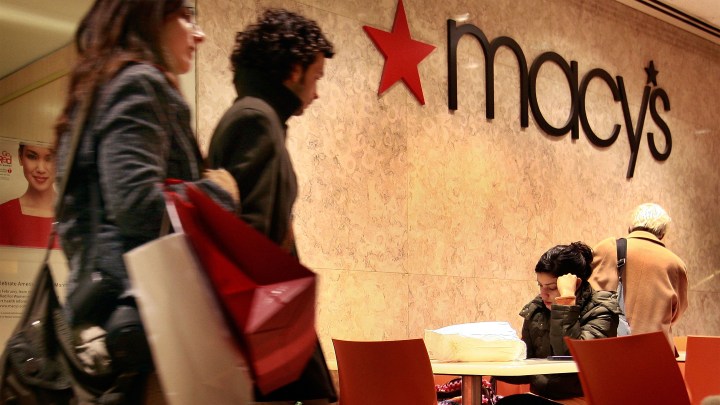 Macy’s announced today that it will close nearly 30 stores. It also reported a 0.6% drop in its in-store sales this holiday season. Which actually wasn’t as big a decline as expected. Pier 1 Imports also says that it’s shutting down almost half of its stores — around 450 locations.

But if you’re getting a bleak picture of what went down this holiday season, it’s not quite that simple.

We’ve been saying for a while that consumer spending is strong, and that’s still true. Holiday sales jumped by almost 3.5% in 2019 compared to last year, according to Mastercard. Denise Dahlhoff, a senior researcher at The Conference Board, said the U.S. consumer is doing fairly well.

“We have a good job market. People feel pretty good, economically, so they are ready to spend on the right items and in the way that they want to,” Dahlhoff said.

The way that they want to. That’s the key phrase.

“The consumer continues to migrate towards online,” Lapinsky said.

And you see this trend play out in different sectors of retail. When you look specifically at department stores — which we know have been struggling —overall holiday sales fell by 2%. But their online sales jumped by 7%, according to the same research.

So, New Year’s Resolution, retailers: figure that one out.