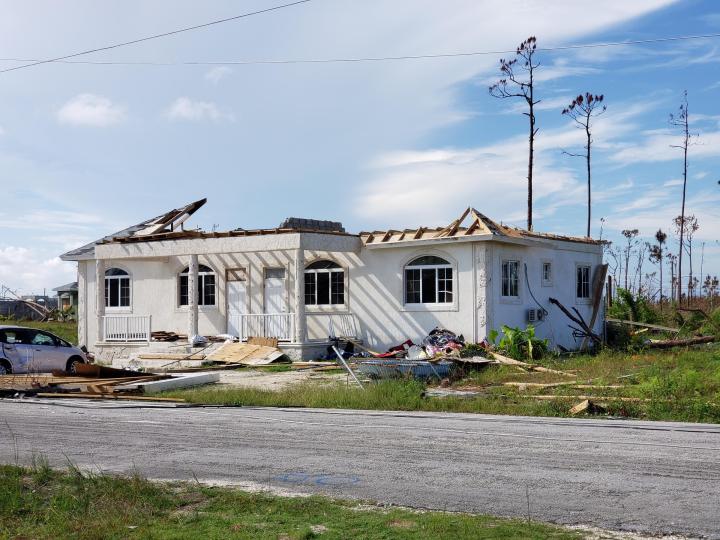 Marsh Harbour resident Dominique Norris drove around her neighborhood slowly, taking in the damage and pointing to the shells of what remained of her neighbors’ homes and businesses.

“That roof over there is completely blown off,” she said. “It’s in the yard over there.” The power plant didn’t fare any better.

“One building is completely missing. It probably ended up in the back of that building somewhere,” said Norris.

The Bahamas is still recovering from Hurricane Dorian, which made landfall in September. The catastrophic hurricane brought 200 mile-per-hour winds and storm surges flooded homes and businesses. The rebuilding process is expected to take years and costs are in the billions.

Norris recently returned to Marsh Harbour on Great Abaco island to check on her home and some family who stayed behind. She’s one of the thousands of Abaconians who left after the storm for other parts of the Bahamas or to the U.S. The few who remain are trying to eek out a living and figure out their next steps while the Bahamian government rolls out its debris clearing and reconstruction plan.

Norris, who works for an international shipping company, was staying at an Airbnb in Hollywood, Florida, while she filed her insurance claim to fix her home. During the storm, pieces of her roof caved in.

“The whole time, we were in a closet,” Norris said. “All of my sheet rock started to fall in different parts of the house.”

She pointed to all her neighbors’ homes: the police officer, the older married couple, the newlyweds; they all left.

Stefan Bristol has been staying in the city of Freeport — about 97 miles away. He works in construction and says business is still slow, even with all the work that needs to be done.

“Right now you basically can’t do construction with all the debris,” he said.

Kesnel Ebren is a Haitian migrant who normally works as a day laborer. All of those jobs are gone now, he said. Ebren said he’s still relying on free food and water from aid groups; the tap water still isn’t safe to drink on the island. The government utility company estimates it will take until June to have that fixed.

There are small signs that some businesses are starting to reopen and entrepreneurs are trying to make the best out of the situation.

Cooperstown, about an hour away, wasn’t as badly damaged. Larry Jones, from Cooperstown, comes to Marsh Harbour daily to sell prepared meals. On a recent afternoon, his offering was smothered pork chops and mushrooms with rice for $10 a plate.

“We know people up here are not getting good food,” said Jones. “They’re only getting the free food and they’re tired of eating that.”

In spite of the challenges of living in Marsh Harbour right now, Norris says she’s determined to rebuild. She says she’s one of the lucky ones — she has homeowner’s insurance.

“Most people on the island are taxi drivers, fisherman; Abaconians like to be self employed. Most people didn’t have insurance, because most people build out of pocket,” she said.

While some of the larger commercial businesses in the tourism industry were insured, Bahamian government officials say most of the smaller businesses and single-family homes on the Abaco Islands did not have that financial protection.