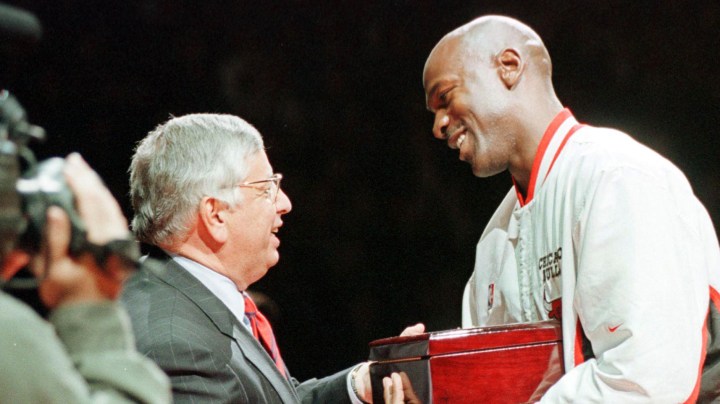 COPY
Michael Jordan (R) of the Chicago Bulls shakes hands with NBA Commissioner David Stern as he is presented with his 1997 NBA Championship ring prior to the 01 November game against the Philadelphia 76'ers, at the United Center in Chicago, IL. VINCENT LAFORET/AFP via Getty Images

Michael Jordan (R) of the Chicago Bulls shakes hands with NBA Commissioner David Stern as he is presented with his 1997 NBA Championship ring prior to the 01 November game against the Philadelphia 76'ers, at the United Center in Chicago, IL. VINCENT LAFORET/AFP via Getty Images
Listen Now

Stern was commissioner from 1984 – 2014, and instead of trying to minimize the rising power of star basketball players, he embraced it and helped shepherd the NBA to become the first American sports league to thrive internationally.

Marketplace’s Andy Uhler spoke to The Athletic’s Daniel Kaplan about Stern’s lasting impact. Below is an edited transcript of their conversation.

Andy Uhler: What is David Stern’s legacy? I’m curious about what we’re going to see for generations on the court, off the court, internationally.

Daniel Kaplan: David Stern took over the NBA in the early 1980s. The best you could say was it was an also-ran league. It was well behind baseball, it was well behind football, maybe on par with hockey. It was seen as largely a league for a particular demographic. It was not seen as a league that was attractive to the large swaths of America, and he turned that around. He changed the image of the NBA, and he had some help along the way. Clearly, the emergence of Magic Johnson, Larry Bird, Michael Jordan certainly helped, but he crafted the image of the NBA that we know and love today.

Uhler: You mentioned Magic Johnson. I’m curious about the NBA as being seen, especially today, as a progressive league. Did Stern face any pushback for embracing Magic Johnson after his HIV/AIDS diagnosis?

Kaplan: The AIDS epidemic of the 1980s, early ’90s, was full of fear. Fear in so many different communities that if someone had AIDS, you couldn’t even touch them. Letting Magic Johnson back on the court when he had AIDS was quite the societal statement.

People who knew David Stern tended to love him. He was a raconteur. He loved to debate. He loved to argue. He loved to be the smartest man in the room, no doubt about that. He truly was a Renaissance man.

Uhler: What about Stern’s legacy in terms of expansion and where the league is as a result of his tenure?

Kaplan: When a league expands it clearly means the league is doing better. You see this with Major League Soccer today. The NBA expanded under David Stern, yes, but that was because he laid the economic foundations of the branding, the images, and the TV deals that allowed it to expand and become attractive in another markets.

Uhler: What about Stern’s life after basketball?

Kaplan: I think that one of the interesting things about David Stern is he had a second act. Once he was done as commissioner of the NBA, he formed an investment fund and they invested in a whole host of sports technology companies. He was widely recruited by these companies. They wanted his advice, his wisdom, his input and that opened a lot of doors for them.

David Stern always used to joke that he when he started in the NBA they literally used a VHS recorder to record highlights and they would laboriously go through it. Now they can do it in seconds. And it’s used now for millions and millions of highlights every day on social media.