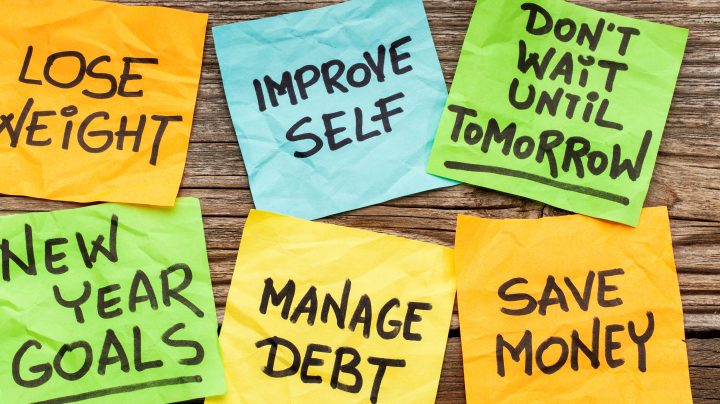 New Year’s, that time when we all, en masse, pledge to do something — or everything — better from now on: eat healthy, exercise, save more money.

“Before the end of the year, it’s just a great opportunity to take stock,” said Rianka Dorsainvil, a certified financial planner in the D.C. area. “Almost everyone, whether it’s family members or clients, there’s always some sort of financial resolution.”

Which keeps financial planners, like her and Ben Martinek, pretty busy this time of year.  “You’re hearing from prospective clients much more than other times of the year,” said Martinek, who runs Bona Fide Finance, a boutique investment management firm in Bismarck, North Dakota. “Folks are reaching out and, kind of like diet and weight loss, are wanting to make a new commitment about some change in their life.”

That might be saving for a down payment or for a family vacation, or paying off credit card debt or student loans. Often there’s a catalyst, some recent or impending life change that gets people thinking about getting their financial lives organized.

“There usually gets to be some sort of pain point. Maybe a loved one has passed away, or there was a close call, or some incident. Maybe a bit of money has come your way, or we saw an increase in income, or we just got married. There tends to be something else that’s happening,” Martinek said. “A lot of times folks have a wake up call, if you will, in which they realize we really could be doing better here.”

The most important thing to do first, according to both Martinek and Dorsainvil, is get a handle on where you are now. “A lot of people, we just put our head in the sand,” Dorsainvil said. “If that’s been you this past year, it’s okay. Let’s start off this new decade with being very intentional about how we spend our money, how we save our money, and the goals that we’re setting around personal finances.”

Setting goals is one thing, making them stick is another. Only 21% of people who make financial resolutions around the new year tend to keep them, according to WalletHub. Those who do, Dorsainvil has found, tend to have a few things in common: Their goals are specific and tangible. They write them down. And they have an accountability partner.

“If you don’t write them down, or type them up… then it’s just a wish,” Dorsainvil said. “With my clients, if we write them down and actually talk about how we’re going to achieve them, most of the time they are achievable.”

People are also much more likely to be successful in keeping a financial resolution if they have a why behind it, a clear motivation.

“Because it becomes real. It’s no longer this fictitious goal of just like, ‘ah, you know, it’ll be nice to pay off this credit card, or it’ll be nice to have $5,000 in savings by the end of the year.’ But this is why,” Dorsainvil said. “So when we start to make decisions about spending, just randomly like, ‘oh, yeah, sure, I’ll go out to this brunch’” … “I can go back and say, ‘well, I’m actually going to say no to this, and this is why. I’m saying no to this happy hour, I’m saying no to this new widget that I can buy, because this is a goal that I have.’”

If you don’t have a concrete goal in mind or if you feel like you don’t know what’s realistic, Martinek recommends starting small. Start by just keeping track of how much you have coming in, and where it’s going.

Budgeting might not feel lofty or exciting, “but there’s a snowball effect, and the better we feel about ourselves, the more excited we are,” he said. “Day-to-day cash flow management is probably the most difficult thing, but also the most beneficial to get under control. I think that’s the life-changing piece.”

He often recommends it to new clients as a good resolution, he said, “because it provides clarity and awareness, it relieves worry, anxiety, and it relieves guilt.”

What better way to start a new year?

Are you making a financial New Year’s resolution? Let us know! We may be in touch with you for a story.