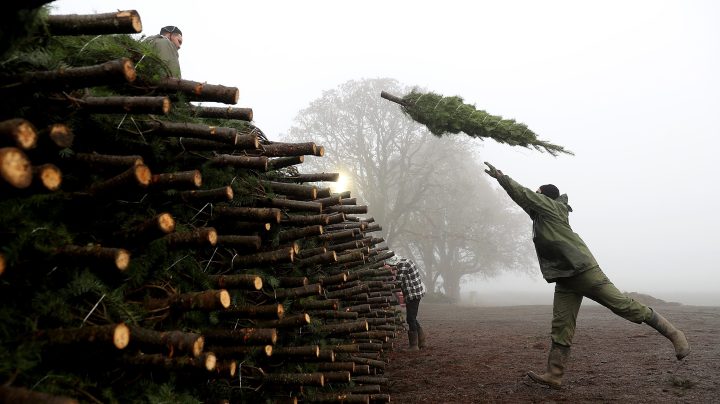 It's not easy being green. Justin Sullivan/Getty Images
Brought to You By

It's not easy being green. Justin Sullivan/Getty Images

A tip for anyone dreading political conversations with family this holiday season: Artificial Christmas trees have bipartisan support.

In a PBS Newshour/NPR/Marist survey from last year, 55% of Americans said they’d be putting up an artificial tree, including the majority of Republican households and 44% of Democratic ones. Another survey says 81% of Christmas trees on display this year will be artificial.

So America’s preference is clear, but does that mean it’s right? Make Me Smart listener D.J. Colwell wrote in to ask which option is more environmentally friendly.

“I grew up with real trees and my fiancé and I have gotten real trees every year because we like them. But I’ve seen some nice looking fakes and I’m wondering if that’s a better choice,” she said. “I’ll probably keep getting real trees unless I find out they are truly awful. But it would be nice to know more about the impact of my choice.”

The answer is that it’s kind of a wash, but it also depends a lot on how long you use it and how you get rid of it. That makes the Christmas tree a potent symbol not just for the season but for the sustainability of many things we buy.

We talked more about this question on the latest episode of “Make Me Smart”:

Let’s start with some basics. The cost of an artificial tree can range from around $10 for a small countertop decoration, to well over $1,000 for the so-called “Cadillac of Christmas trees”: a remote-controlled, seven-and-a-half foot lit model from the luxury brand Balsam Hill. But pretty much every artificial tree starts in the same place.

“Pre-lit artificial Christmas trees are 100% made in China. They’ve actually never been made in the United States,” said Balsam Hill CEO and tree designer Mac Harman, in part because it’s a lot of hands-on work that takes two or three hours.

Machines mold the plastic branch tips, which are then attached to the metal frame in a process similar to basket weaving. There are no shortcuts, Harman said, cheaper trees you might find at a big-box store are handmade too.

“Going hands on with plenty of trees, as I have, it seems quite clear that many of them are coming off of the same molds — maybe with a few modifications here and there to kind of distinguish one brand from another,” said Tim Heffernan, a senior staff writer at Wirecutter. He wrote the consumer review site’s guide to artificial trees. “I don’t think this is a cottage industry.”

That makes it pretty straightforward to gauge the monetary and environmental cost of a given tree, he said. You get what you pay for: More height, more girth, more lights and more realistic branch tips all add up to a higher price and more metal, plastic, copper and (sometimes) glass. The way those materials are all fused together makes recycling an artificial tree basically impossible.

“I think an artificial Christmas tree is a little bit like a juice box from a recyclability standpoint,” Harman said. You can’t easily pull apart the laminated layers of foil, paper and plastic, so the juice box ends up in the trash. “Every material in the Christmas tree is recyclable. The trick is, how do you disaggregate them from each other?”

Balsam Hill has been working on a more recyclable tree since 2007, Harman said, but they haven’t found anything good enough to go to market.

“When you’re done and tired of it and you want to get a new one, what are you going do? You’re going to throw it away in the landfill. It is not biodegradable. A real Christmas tree is,” said Beth Peltzer, whose family has run the California choose-and-cut tree farm Peltzer Pines since the 1960s.

The National Christmas Tree Association, a trade group representing farmers, stresses that live trees don’t come from wanton deforestation but sustainable agriculture. While some of the country’s most famous Christmas trees are taken from the wild, the Washington Post reported that 98% of live trees in American homes come from a farm.

“Natural trees, living trees are not a particularly intensive form of agriculture,” Heffernan said. “They’re not hugely intensive on pesticides, for example, they do to some extent provide natural habitat.”

Fir trees can grow on hilly land otherwise unsuitable for farming, and they take around a decade to reach their ideal height. In the meantime, they capture carbon and produce oxygen. That timeline also means the industry is still feeling the effects of the recession while those Chinese factories have since recovered. The average cost of a live tree rose slightly last year to $78, but the NCTA has said there are enough to go around. Come January, those trees can be recycled, turned into mulch or even sunk into ponds for fish to live in. Many communities have their own program but you have to do a little research.

The NCTA has a fake foliage counterpart, the American Christmas Tree Association. In a press release ringing in the season, executive director Jami Warner said real vs. artificial is “a personal preference. What really matters is the people you have surrounding it.”

Still, the ACTA has commissioned multiple studies on Christmas trees’ environmental impact. The most recent one is exacting, including specific emissions data for a large Chinese tree factory and the fuel consumed by large shipping vessels carrying them across the ocean. It also accounts for all the steps in the life of an “average” real tree, from the gas used to move seedlings to the string that holds the tree together, all the way through mulching, incineration or the landfill.

Disposal of a real tree makes a big difference in its carbon footprint, the studies authors found, whereas manufacture of a fake tree always has the biggest impact. Taken all together, the study concluded an artificial tree is actually the greener option if you keep it more than five years.

The tree farmers group obviously takes issue with that result, and a forestry expert interviewed by the New York Times said the study didn’t factor in all the benefits of domestic tree farming, like tree farms’ boost to the local economy.

A Nielsen survey commissioned by the ACTA found that the average consumer keeps their artificial tree for 10 years. But Heffernan said a good one should last longer, and you could use a “Cadillac” tree for decades.

Obviously, buying a nicer item that you can repair or reuse instead of replace is fundamental to being an Earth-conscious consumer. It’s as true for artificial trees as it is for clothes or Christmas lights — an LED string usually won’t crap out if a bulb comes loose, and uses up less electricity overall.

Ultimately, if you’re a real-tree partisan (like most of the “Make Me Smart” staff) or a fake tree household feeling a little guilty, Heffernan said it’s important to keep things in perspective.

“It’s probably going to be the biggest and most obvious piece of plastic that you’re ever going to buy, right? And it’s sitting there in your living room and you’re thinking, ‘Jeez, did I really need to do that?'” he said. “But versus the the amount of gas you burn over the course of a year, the type and number of gifts you’re putting under the tree … [those] are going to add up to a much greater impact.” 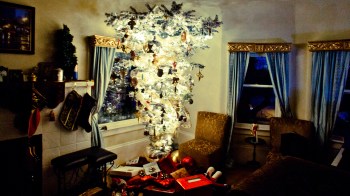 The upside-down Christmas tree. What’s it all about? 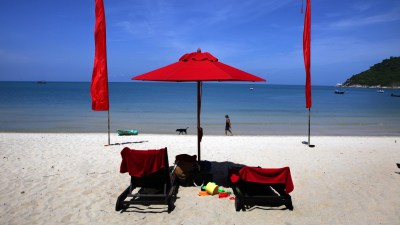