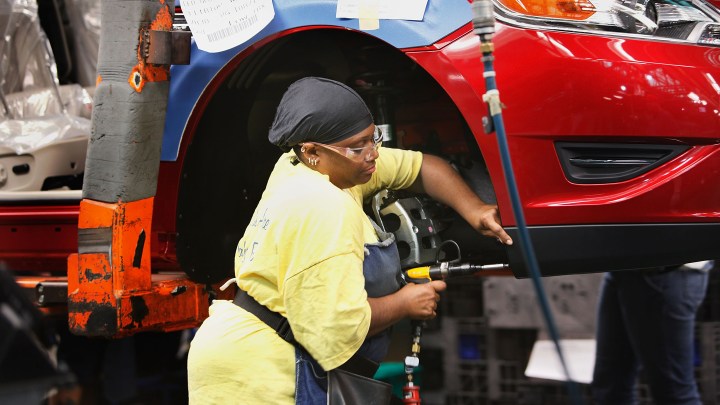 COPY
There are fewer jobs in auto assembly and parts so far this year. Above, a worker builds cars on the assembly line at a plant in Chicago, Illinois. Scott Olson/Getty Images

There are fewer jobs in auto assembly and parts so far this year. Above, a worker builds cars on the assembly line at a plant in Chicago, Illinois. Scott Olson/Getty Images
Listen Now

Brusuelas predicted that an emerging thaw in U.S.-China trade relations will give a small boost to manufacturing in early 2020.

“There’s been a modest lifting of the uncertainty tax on U.S. firms, especially large ones that operate multi-nationally,” he said. “And that may release a bit of pent-up demand in business investment in software, equipment, buildings and perhaps factories.”

“At least in the first quarter, we should see some increased business spending. But in the last three electoral cycles, firms have just not made any investment in the second or third quarter ahead of elections, due to the political risks,” Brusuelas said.

The number of jobs in auto assembly and parts has fallen slightly in 2019. Kristin Dziczek, vice president of industry, labor and economics at the Center for Automotive Research said the new trade agreement with Canada and Mexico may boost employment over the next few years. But down the road, growth in electric vehicles will likely take jobs away.

“Those are much more costly to build, but there are fewer moving parts. Battery production is not as labor-intensive as engine and transmission,” Dziczek said.

So far this year, there have been manufacturing job losses across the auto-making heartland — in Illinois, Indiana, Michigan and Wisconsin. Other states that have lost manufacturing jobs are Pennsylvania, North Carolina, New York, Rhode Island, New Hampshire, Oklahoma and Kansas.