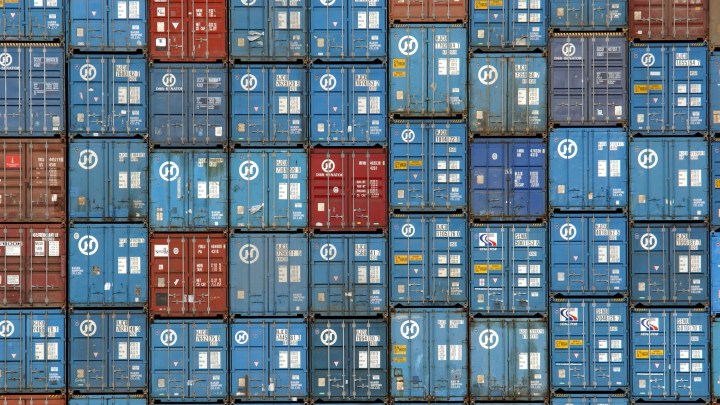 COPY
One reason inflation is so low might be globalization. David McNew/Getty Images

One reason inflation is so low might be globalization. David McNew/Getty Images
Listen Now

There’s a mysterious lack of inflation in the U.S. economy — especially since unemployment is at a 50-year low.

The Consumer Price Index rose 2.1% in November — mostly thanks to energy and housing costs. The inflation measure that the Federal Reserve prefers to use — Personal Consumption Expenditures — rose by only 1.3% in October.

What gives? Fed Chairman Jay Powell gave one possible explanation during his press conference Wednesday. Marketplace’s Nancy Marshall-Genzer asked why wages aren’t growing as much as we might expect.

In other words, American workers are now competing with workers all over the world. The labor market and business supply chains are global, leading to lower prices.

“Institutional changes in the labor market have really undercut workers’ ability to bargain for higher wages — things like decline of unions and globalization,” said Jesse Rothstein, a labor economist at UC Berkeley.

Global supply chains allow importers to find the cheapest suppliers of lawn chairs or laptops, and the cheapest workers to make them, according to economist Mark Kuperberg at Swarthmore College.

“The possibility of offshoring is a huge disincentive to labor to ask for higher wages,” Kuperberg said.

“We now have outsourcing just as high, if not higher, in the service sector and in white-collar jobs,” Bronfenbrenner said. “There’s the feeling that almost any job can be outsourced.”

“The primary way that U.S. businesses have responded to this is to hire remote workers within the U.S. and not to offshore those jobs,” said Adam Ozimek, chief economist at gig work website Upwork.

Availability of products and services

This same global trend applies to consumers — both individuals and businesses buying products and services.

“The ease of searching through places like Amazon does lower the variation and the prices,” said Max Gillman, a professor of economic history at the University of Missouri-St Louis. “That can lead to a lower measured aggregate inflation rate.”

Internet-comparison shopping has kept prices down, but maybe not as much as we think. Alan Detmeister, an economist with UBS, said there has been price competition for 100 years.

Over the decades, we’ve gone from mom-and-pop stores, to specialty stores, to big box stores. Best Buy and Walmart were once revolutionary like Amazon is today. But we didn’t have the inflation lull we do today. It’s very easy to overstate the impact of the internet on holding down prices,” Detmeister said.

Comparison shopping with the internet is holding down some prices, but not all. Sure, there are bargains for discount shoppers but sometimes there are higher prices for people who don’t know any better.

“Firms are figuring out how they can charge different prices to different buyers for the same thing,” said Joe Gagnon, an economist with the Peterson Institute. “Some are going down and some are going up.”

This leaves us with a persistent inflation mystery in economics on our hands. For now, maybe just be happy prices aren’t spiking.